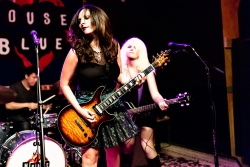 Los Angeles, CA, August 11, 2016 --(PR.com)-- Often hailed as “the B-52’s on steroids,” Daddy Issues is a high-energy band from Southern California that entertains audiences with fun, sexy shows and loud guitars to match. The band is the brainchild of singer/songwriter, Angela Alvarez, and bassist, Julia “Jules” Whelpton, and is known for its catchy tunes and on-stage antics. From fall 2013 to present day, Daddy Issues has played sold out shows in Southern California, Arizona, and Las Vegas at legendary venues such as House of Blues, Belly Up Tavern, the Casbah, and Whisky A Go Go in Los Angeles.

The band began in San Diego when lead singer, Angela was in search of an original rock band after moving from Scottsdale, AZ. Using Craigslist, she found a band called The Justice Fire, where Jules played bass. Within a couple of months, the pair decided to split off and create a high-energy rock band that mashed other forms of popular music together. They tested the name Daddy Issues at a local acoustic show in November 2013 to positive reception, and then decided to pursue the full-band setting.

Their career was further boosted by local radio play, eventually the band got the attention of local rock legend, Roni Lee. Lee recently signed Daddy Issues to her label, Play Like a Girl Records.

Taking cues from No Doubt, Green Day, Arctic Monkeys and The Foo Fighters, the band's music is a blend of 90’s and modern tropes. The songs contain catchy riffs and singalong choruses, an incorporate various musical styles such as reggae, punk and latin. Their wide variety of influences include The Beatles, Aerosmith, Queens of the Stone Age and Halestorm to name a few. Recording with Jim Wirt of Crushtone Records in Cleveland, OH, Daddy Issues will release its first full-length album, Handle It in September of 2016.

The album release show is September 10, 2016 at House of Blues in San Diego.