Summer in the City Gets a Little Hotter with Uptempo Pop Romp "L.A. Nights" from Indie Singer/Songwriter/Producer Ayhan Sahin

It has been celebrated by variety of artists. And now the city of Los Angeles has a brand new sonic love letter, thanks to Ayhan Sahin’s “L.A. Nights,” released by independent label Young Pals Music. 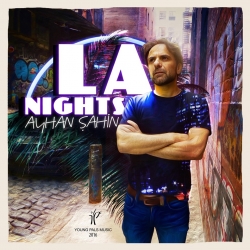 New York, NY, August 18, 2016 --(PR.com)-- Guided by a manifold of strings, the joyous, uptempo “L.A. Nights” opens with the revelry of classical guitars - a bow to R.E.M.’s “Losing My Religion” (courtesy of the acclaimed Rafael Cintron). The song then unleashes a cascade of plucky acoustic guitars and then a wondrous blur of electric guitars (from Dan DelVecchio). The latter two mesh in the song’s midsection into a kaleidoscopic force field that is ultimately part of the song’s defining calling card.

Even so, it’s just as likely that the anthem’s maddeningly catchy chorus will live long in listeners’ heads - and speakers. Written by Sahin with Bernadette O’Reilly, he sings, “In the starry twilight, west of ‘cannot do it,’ Southern California stands/Facing towards the ocean, bonding with the people, urging everyone to dance/L.A. Nights, the city of lights will zap you right between the eyes, one little slice is like a never-ending ride, open your mind and find the secrets that unfold.”

“I wrote this song as a tribute to my time living in Los Angeles in a different era,” songwriter and co-producer O’Reilly says. “I was just starting out as a songwriter in the ‘80s music industry and all things were possible. That inspired the lines, ‘Nothing’s in the way of the imagination, Letting every dreamer have a clearer picture of what’s inside the heart.’ For sure, once you’ve lived in Southern California, it never leaves your heart.”

Sahin adds, “I’m originally from Turkey - a long way from L.A. - but I spent summers on the warm and dreamy Aegean coast of Bodrum, where it is much like the U.S. West Coast. I loved bringing my memories of a similar land into singing Bernadette’s words.”

“L.A. Nights” is the sixth single release from “Pop,” the first full-length namesake collection from Young Pals Music founder Sahin - and one of the rare tracks featuring him as lead vocalist. The album was awarded two Akademia Music Awards for previous singles “Since You’ve Been Gone” and “Love Everybody” and Global Music Awards for “Drink.” The collection offers 12+ diverse vocalists & musicians across a myriad of styles, including R&B & soul, dance, rock, country and of course...pop.