To commemorate 15 years since the first release of Trainz in December 2001, N3V Games today announced the launch of their latest edition of the Trainz franchise, Trainz Model Railroad 2017 (TMR17). They also announced a 15 day long, "15th Anniversary Celebration" which provides a range of rewards to existing customers and offers new customers the opportunity to pick up the entire back catalog of games released since 2001. 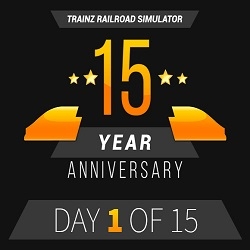 Brisbane, Australia, December 05, 2016 --(PR.com)-- To commemorate 15 years since the first release of Trainz way back in December 2001, N3V Games today announced the launch of their latest edition of the Trainz franchise, Trainz Model Railroad 2017 (TMR17).

In recognition of the origins of the long-running railroad simulator franchise, which began life with the tagline "Virtual Model Railroading on your PC," this latest version of Trainz once again focuses on "model railroads."

With seven passionately created routes and dozens of sessions and tutorials, TMR17 provides a different perspective on railroading, condensing the action into smaller, more detailed environments.

Users can still choose from "simple" or "realistic" driving modes, they can still hop inside the cab to capture the engineer’s view, or they can zoom out to see an overview of the complete “layout.”

Most importantly, TMR17 also includes the user-friendly "Surveyor" world builder that has been the cornerstone of Trainz since the first day it was released. This allows users to create their own worlds and provide endless hours of creativity and enjoyment.

"After 15 years making Trainz, we think we know the train sim market better than anyone," said Tony Hilliam, CEO of N3V Games. "There are many different aspects to our products, and our fans have a broad range of interests. While some like to spend their time driving, others prefer operating many trains at once, while other prefer to build their own routes. An increasing number of fans have been showing a lot of interest in creating smaller, more condensed routes, and surrounding those routes with walls. This enables them to spend more time focussed on the important details around the track and less time fleshing out the unimportant surroundings.

In addition to the launch of TMR17, N3V Games have announced their 15th Anniversary Celebrations. Over the next 15 days N3V will be unveiling a range of special promotions and interesting back-stories regarding each major Trainz release over the past 15 years.

The celebration kicks off with the digital re-release of the very first Trainz Edition from 2001 for free on the "Trainzportal.com" store (store.trainzportal.com).

Then, each day over the coming two weeks, additional Trainz versions will also be made available at a fraction of the original price for a limited time only.

N3V Games have also announced a huge reward system for existing customers. All owners who have registered a full version of Trainz from the past 15 years have been issued with a reward that can be accessed from their “MyTrainz” account and redeemed from the new "Trainzportal.com" store (store.trainzportal.com).

The more versions registered, the bigger the reward received. Full details of the promotion can be found at this news link. 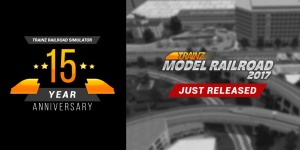 Celebrating 15 Years of Trainz over 15 Days

Trainz has been around since the Pentium II, and dial-up modems were a modern miracle. Trainz has seen millions of hours played across a long list of product releases. It's time to celebrate a product that is more hobby than game and has a core audience addicted since their first install in 2001.