Second study will focus on benefits of removing toxic metal pollutants in patients with diabetes and a prior heart attack. 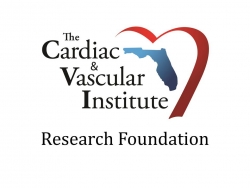 Gainesville, FL, December 07, 2016 --(PR.com)-- The Cardiac & Vascular Institute Research Foundation (TCAVIRF) has been named a participating clinical site for the second Trial to Assess Chelation Therapy (TACT2). TACT2 will examine the use of intravenous chelation treatments in combination with oral vitamins in diabetic patients with a prior heart attack to determine if they reduce recurrent heart episodes, such as heart attacks, stroke, death, and others, by removing toxins from the blood.

Chelation is a process by which a medication, such as edetate disodium (Na2EDTA), can “grab” and remove toxic metal pollutants - like lead or cadmium - which are present in most individuals.

TACT2 follows up on the positive results of TACT, an NIH-sponsored multicenter, double-blind safety and efficacy study, which took place from 2002- 2012 and was conducted in 134 sites across the United States and Canada. During TACT, 1,708 heart attack patients were randomly assigned to receive 40 infusions of an edetate disodium-based chelation solution or a placebo (inactive) infusion. Patients also received an oral vitamin and mineral regimen, or an oral placebo.

TACT2 will narrow its focus to the group with the greatest benefit in the original study - diabetic patients 50 years of age or older who have survived a prior heart attack.

The original TACT clinical results were published in the Journal of the American Medical Association in 2013, Circulation: Quality and Outcomes in 2014, and the American Heart Journal in 2014.

“If TACT2 is positive, it will forever change the way we treat heart attack patients and view toxic metals in the environment,” said Gervasio Lamas, M.D., study chairman and chief of the Columbia Division of Cardiology at Mount Sinai Medical Center in Miami Beach, Florida. “Therefore, with NIH support and in collaboration with the Duke Clinical Research Institute, Columbia University, New York University, Mount Sinai (NYC), and hundreds of physicians and nurses throughout the U.S. and Canada, we are moving forward with TACT2.”

"The results of the initial TACT study were very impressive in the diabetic population, in fact, better than many other recommended medications,” said Michael Dillon, M.D., cardiologist at The Cardiac & Vascular Institute. “This certainly raises important questions about management of CAD in diabetics. I am very excited about the opportunity to see if the results of the initial trial can be confirmed in TACT 2.”

Although not approved by the Food and Drug Administration for treating heart disease, some practitioners have used chelation therapy for nearly 60 years in the absence of clinical trial data supporting its use. Because of the lack of data, it has generally been believed by conventional medical practitioners and cardiologists to be without value, although TACT results suggest otherwise. A definitive answer on chelation therapy in diabetic patients that will be embraced by the cardiology community will require positive results from TACT2.

The Cardiac & Vascular Institute Research Foundation is currently recruiting patients for participation in the study. Candidates must be 50 years of age or older, have diabetes and experienced a prior heart attack. Patients interesting in participating may contact the study team through www.tact2.org, or by calling TCAVIRF at 352-244-0208.