The popular online serial, “Working Boys – A Midnight Murder Mystery” by Milton Stern, has been released in two parts and is available from all online retailers in e-reader and hard copy format (www.miltonstern.com). 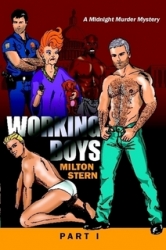 Baltimore, MD, April 26, 2017 --(PR.com)-- Published weekly over a two-year period, all the chapters are now together in two print editions. Follow the lives of notorious, retired madam, Madeline Bennett, and her two Gay sons, Bradley, a former escort, and Marty, a police detective, as they navigate mid-life, while working to solve thirty-year-old, cold murder cases that may be related to a spate of recent beating deaths of working boys. Meet a colorful cast of characters who come into and out of their lives as well as many nefarious individuals, whose only goal is to destroy them. "Working Boys – A Midnight Murder Mystery, Part I" is just the beginning. The adventure continues in Working Boys PartT II.

Milton Stern is the author of nine books, including Harriet Lane, America's First Lady; on Tuesday's, They Played Mah Jongg, and The Gay Jew in the Trailer Park. Milton also wrote the introduction to Mah Jongg, The Art of the Game. Milton writes a monthly column for a national antique automobile magazine. He resides in Jessup, Maryland.