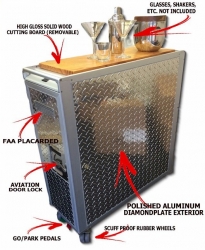 Alexandria, VA, June 07, 2017 --(PR.com)-- SkyHigh Beverage Carts, located at www.skyhighbeveragecarts.com, a Northern Virginia based industrial design firm, has launched its five model collection of genuine, FAA rated airline beverage carts, which are described as "dressed to kill and ready to roll right into your home or office," by graphic artist Jay Owens, who designs and installs many of the exteriors for the company's corporate clientele.

"Sky High Carts can be used as the ultimate portable bar for making splashy drinks at your next party, media storage, displaying collectibles, an office organizer, a man cave show piece, even a rolling work station at a hair salon," says company CEO Marc Anderson.

The company has been featured on HGTV’s “America’s Most Desperate Kitchens,” and has been re-purposing airline beverage carts for years, but this is their first major launch aimed at the discriminating furniture accessory marketplace.

Each cart is hand crafted, and they can even do custom carts with unique logos and color schemes for companies or celebrities looking for a unique centerpiece to market their product lines or services.

“I started out repurposing airline beverage carts in 2009, and the project took off immediately. People have a soft spot for an airline beverage cart. It’s truly iconic, and when they see a sparkly and crisp looking version of the typically worn out, scratched up servant of the skies that rumbles down the center aisle, their jaws drop. It’s a lot of fun delivering a product that everyone loves,” says Mr. Anderson, an internationally recognized artist and designer.

The company’s biggest concern is how fast they can ship out carts after their launch date. “Customers placing initial orders may have to wait six months, which is what happened when we appeared on HGTV; everyone had to have one and fast,” said Anderson. The company is ramping up production capability from their New Orleans, Louisiana, and Alexandria, Virginia facilities, to keep up with demand.

To learn more about SkyHigh Beverage Carts or to book an interview, contact the company at 985 966 7000, email skyhighcarts@gmail.com, or visit the website at www.skyhighbeveragecarts.com.

SkyHigh Beverage Carts was conceived in 2015, and began re-purposing flown (used) airline beverage carts with a vintage twist. Each cart had unique dings and dents, and many of them had flown millions of miles in the sky, dutifully serving hundreds of thousands of passengers.

Prior to launching their new site, the company switched to brand new airline beverage cart platforms because many customers didn’t want the vintage carts, though they will occasionally still procure flown carts upon request or customize carts brought to them.

The techniques used for applying the beautiful, polished metal exteriors are proprietary, and each cart is outfitted on all four sides. The signature red and green park pedals actually work, and each cart is equipped with a hand finished coordinating painted or stained solid wooden top panel.

The company is initially gearing up so that as many as 500 carts per month can be produced by a team of metal workers and artists. Ultimately, the company expects to ship 2,000-2,500 carts per month. Mr. Anderson personally signs each cart on the underside, reflecting the fact that he views each SkyHigh airline beverage cart - www.skyhighbeveragecarts.com - as an individual work of art. Each cart retails for $1,897 and includes complimentary shipping to the 48 contiguous U.S. states.
Contact
SkyHigh Airline Beverage Carts
John Marc Anderson
985-966-7000
www.skyhighbeveragecarts.com