Innkeepers Sallie and Welling Clark celebrated 31 years and over 40,000 guests as a milestone for Holden House, as the first bed and breakfast established on the historic Westside of Colorado Springs when they opened their doors in 1986. 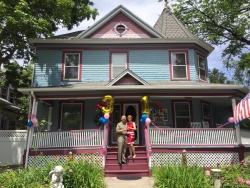 Colorado Springs, CO, June 09, 2017 --(PR.com)-- This year on June 9, 2017, Holden House 1902 Bed & Breakfast Inn celebrated its 31st Anniversary of guest service in the B&B industry. An appropriate anniversary designation for an inn that has itself, received designation for the “Best Bed & Breakfast Inn for an Anniversary” by Arrington’s Inn Traveler Magazine. Holden House has the distinction of being one of the longest established B&Bs in the state of Colorado operated under the same ownership since Sallie and Welling Clark started the business in 1986. Other awards over the years include “Top 50 Inns in America” by Inn Times, “Best Inn Buys” from Bed and Breakfast/Country Inns Magazine, “Best of the Springs” from the Colorado Springs Gazette and “Best Of” from the Colorado Springs Independent, as well as numerous historic preservation and guest service awards from various organizations, including a coveted AAA Diamond rating.

When asked what has allowed the Clarks to continue in the B&B innkeeping business, Sallie Clark says, “We’ve learned to adapt to the changing needs of the tourism and bed and breakfast industry while balancing our personal lives and employing a competent and dedicated innkeeping staff. The love of our community and sharing the Pikes Peak region with guests instills in us a continued appreciation for Colorado Springs.” Sallie Clark also serves president for the state bed and breakfast association (which she and Welling founded in 1987). Her husband, Welling Clark, works for a national defense firm and is a local neighborhood leader. Both successfully juggle their busy lives by being involved in the community and the neighborhood in which they live and work.

For more information on Holden House 1902 Bed & Breakfast Inn www.HoldenHouse.com or call 888-565-3980. The website also features information on inn specials and packages, favorite recipes and details on Holden House and the Pikes Peak region. An inn-tour video is included on the website and you can also find the inn on Facebook, Twitter, Pinterest and Instagram.
Contact
Holden House 1902 Bed & Breakfast Inn
Sallie Clark
719-471-3980
www.HoldenHouse.com