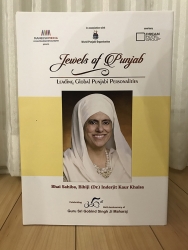 Espanola, NM, October 30, 2017 --(PR.com)-- Panth Rattan Bhai Sahiba Bibiji Inderjit Kaur Khalsa has been honored by Maneesh Media with inclusion in Jewels of Punjab – Leading Global Punjabi Personalities, 34th publication, released on the eve of India’s 71st Independence Day, August 14, 2017, in New Delhi, is a commemoration graced by top personalities who inspire us, from 15 nations around the globe.

Panth Rattan Bhai Sahiba Bibiji Inderjit Kaur Khalsa, Ph.D., has been honored by Maneesh Media with inclusion in Jewels of Punjab – Leading Global Punjabi Personalities, 34th publication, released on the eve of India’s 71st Independence Day, August 14, 2017, in New Delhi. Bibiji was granted the honorific Panth Rattan or Jewel of the Nation from the Jethadar of Takhat Sri Patna Sahib, Singh Sahib Iqbal Singh, in 2005 and the title of Bhai Sahiba by the Siri Akal Takht Sahib in 2004. She has held the position of Bhai Sahiba, Chief Religious Minister of Sikh Dharma International, since 1983. Her late husband, Siri Singh Sahib Bhai Sahib Harbhajan Singh Khalsa Yogiji, was honoured with the title of Bhai Sahib by the Akal Takhat in 1974 and the title of Panth Rattan from the Jethadar of Takht Sri Keshghar Sahib in 1999. This marks the first time in history that the meritorious honour of Panth Rattan and Bhai Sahib have been given to both husband and wife. The Siri Singh Sahib was awarded a joint United States Congressional Resolution honouring his life’s work in 2005. In their service to humanity, they are renowned globally as good-will investors in the world. Yet, with all their accomplishments over four decades, neither the Bhai Sahiba nor the Siri Singh Sahib take credit for the extraordinary growth of Sikhism in the West. As Bibiji explains, “The spread of Sikhism is not to be credited to anyone, but is a beautiful illustration of Sikhism as a universal religion.”

Bibiji is the founder of Create Inner Peace and is recognized as a harbinger of interfaith dialogue among religious and political leaders, honoured as a revered "mother" and as an ambassador of peace and good-will by people around the globe. Her endless dedication to the Guru’s mission has brought her prominence and recognition in every corner of the globe, for her religious work, her wisdom, philanthropy, dignity and grace. She travels and teaches internationally, working tirelessly, to bring the Sikh lifestyle and rich Indian culture to people throughout the world. Her teachings formed the basis of Sikh instruction in the Western world, and together with her husband, thousands of young people around the globe have been inspired to embrace Sikh Dharma. Today, Westerners who have become Sikhs and their generations are seen everywhere in their white turbans and flowing chunnis.

Bibiji’s family lineage has carried the title of Bhai Sahib since the days of Bhai Sahib Abnasha Singh, and today, even after the partition and occupancy of her ancestral home by the Muslim community in Pakistan, the street on which they lived is still known as Bhai Sahib’s Mohalla. From her family heritage and her education and training, Bibiji well understood the sacred responsibilities of this position.

“It was a great honour and I knew it was my responsibility and destiny to serve.”

For generations, the blithesome and valiant Punjabis have been ahead in their respective fields of work, having reached every corner of the world. Since this year holds a special meaning in the hearts of Punjabis, we celebrate the community beyond the boundaries. With this tome, Maneesh Media celebrates the 350th birth anniversary of the tenth Sikh Guru, Guru Gobind Singh ji. Jewels of Punjab – Leading Global Punjabi Personalities, honors the most successful men and women, who have settled away from their heartland, yet are rooted in India; those who have struggled to find a base, yet stayed jovial; the men and women from Punjab, the land of wit, fun, hard-work, and sacrifice.
Contact
Create Inner Peace
GurumeetKaur Khalsa
505 927 0768
www.createinnerpeace.com
S.S. Gurumeet Kaur Khalsa, ERYT 500
Assistant to the Office of the Bhai Sahiba, Sikh Dharma International
Create Inner Peace
(505) 927-0768
gurumeetkaur@gmail.com
http://www.youtube.com/createinnerpeace