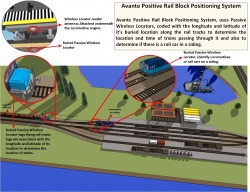 Princeton Junction, NJ, February 13, 2018 --(PR.com)-- Recent rail accidents can be attributed to the lack of visibility or inability to know there were parked trains or vehicles on an unexpected track or crossing respectively in advance before the train can be stopped. Other well-known examples of avoidable train accidents in the last few years are more attributed to train engineers’ human errors.

1) The 2017 derailing of a high speed train in Washington State, traveling at 78 miles per hour. 50 miles per hour over the speed limit, when the incident happened. Three passengers killed and 62 passengers and crew injured.
2) The 2015 derailing of a train near Philadelphia. Of the 238 passengers and 5 crew, 8 were killed and over 200 injured. The train traveling at 102 mph in a 50 mph zone of curved tracks when it derailed.

Train professionals and operators agree that such accidents would not have happened if the proposed and overdue automatic train control (ATC) system or positive train control (PTC) system were in place on those trains. That is, the PTC system would know when trains are travelling at speeds which are restricted and would provide advanced warning if actions are not taken by the train engineers. The ATC system would automatically engage and slow the train down before an accident occurs.

AVANTE’s PTC system would not require the use of trackside communication or any communication from central command to exercise automatic train control.

The rail position locator and block identifies where the train is traveling, being read by a sensor and fed into an onboard AVANTE alerting system which interfaces with the automatic train control (ATC) system if available. If the train does not have ATC, AVANTE’s PTC included function of ATC exercises an alert and follows up with automatic control to slow the train down if required.

The RF identifiers of the rail blocks are concealed underground in the middle of the track and can be sensed and read at a distance above the ground by a monitoring reader mounted under the train car. The geo-tagged position of the locating event is also sent to central command in real-time via existing infrastructure of cellular networks and fail-over to satellite communications to ensure fail safe communication.

AVANTE’s patented and patent-pending PTC technologies are designed to provide redundant system control to the proposed PTC systems as a supplementary system and thus totally independent of the proposed infrastructure. The simplicity of the installation can be implemented as standalone system that can carry out PTC functions in a matter of weeks. The functioning of the system does not have to wait for extensive infrastructure of underground fiber-optic links and other trackside infrastructure. 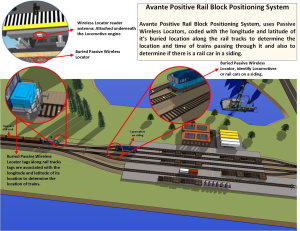