There is No Outside the Arcane Cage 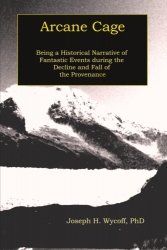 Chicago, IL, May 11, 2018 --(PR.com)-- In the tradition of Jean d'Ormesson's "Glory of the Empire," the latest work by historian, Joseph H. Wycoff PhD, introduces readers to the magical "empire for liberty" that raised humankind from its preternatural state of captivity and spawned a thousand civilizations. In a fabulously revisionist history of the Provenance, "Arcane Cage" deftly recounts significant events and powerful tales from the long millennium of the Arcane Age.

In the pages of this remarkable text, a strange and beautiful era unfolds to reveal the unmatched character of the peoples of the Provenance and the personal resilience of one of democracy's greatest champions from the distant past. Correcting the common notion of a backward and monarchical time, "Arcane Cage" brings to light the republican ethos of the world's first social democracy and the fervor for higher education in arcane philosophy among the many cultures of the age. Immersed in this deep historical context, the fascinating and inspiring story of an eastern cleric at the wild, western “city at the extremity” of the Provenancial empire serves as an apt reminder of the nefarious forces that are still at work to undermine democracy and enlightenment in the modern world.

The first historical narrative of its kind to examine and translate the rich trove of materials and artifacts recently recovered from the archaeological dig now thought to be the antediluvian site of Tityos, Dr. Wycoff's sympathetic portrayal of the cultures of the Kobaloi and Orga challenges traditional preconceptions and prejudices against the roguish and barbaric peoples of early history. With penetrating insight and analysis of the new archives, his work exposes how the Provenance laid the foundations for its own fall and decline as it expanded the dominion of the republican councils over the known world.

Published by Historia|Research Press, the book primarily examines the records and deeds of Sĭddrah, an untested adventurer from Naxos sent by the Councils of the Provenance to investigate troubling disturbances and mysterious events in the waning decades of the Arcane Age. A meticulous and copious chronicler for her time, Sĭddrah's papers provide an unequaled window into the motivations and aspirations that animated the enchanting individuals who defined the period. Supported by a small band of extraordinary characters, each drawn to the edge of the empire for a private cause, the eastern cleric and her associates exposed a plot to undermine the Provenance and tear down the first republican government in recorded history.

Joseph H. Wycoff, PhD is an independent scholar who has worked in higher education for much of the past twenty-five years. He holds a doctorate in US history with an emphasis on business and consumer history. His administrative background features experience in three sectors of higher education: a community college, a private nonprofit institution, and a Research I university, the University of Washington where he earned his doctorate. He has presented independent scholarship for the Society for Social Science History, Business History Conference, New England Historical Association, and Historians of the Early American Republic.

“This work has given me an opportunity to bring together my training as a professional historian and my fascination with the arcane peoples and their classical powers,” Dr. Wycoff shared. “Scholars largely have neglected the origins of democracy and enlightenment in the Provenance. For many years, this field of historical study has been hamstrung by the notion that the arcane past was a largely primitive and relatively inhuman age favorable to monarchs and despots. Nothing could be further from the truth. No people dedicated themselves to the ideals of self-governance or exemplified the virtues of enlightenment from higher education more so than the cultures of the Arcane Age.”

Dr. Wycoff’s engaging narrative reveals that there is much more to the arcane past in world history than the plight of poverty, petty disputations among royalty and their courts, or the primal contest between good and evil. More alarming, his account of events and epilogue suggest persuasively that the sorcery that brought the Provenance to its knees may remain the single greatest threat to the globe's democracies today.

While ambitious in scope and aim in his effort to correct the record of the world's first social democracy, Dr. Wycoff acknowledges his profound indebtedness to the immortal Jean d'Ormesson and the many fantastic authors who established and professionalized the study of arcane history. “There is no Provenance,” he adds, “If not for the wit and imagination of the giants in the humanities. Moreover, without the benefit of prior historical research, the Provenance would not merit close scrutiny or wistful regard by we moderns who enjoy the fruits of this golden age for freedom and economic productivity.”

"Arcane Cage: Being a Historical Narrative of Fantastic Events during the Decline and Fall of the Provenance" is available from Amazon.com, bookstores, and other online retailers.

There Is No Outside the Arcane Cage

Press Release for "Arcane Cage: Being a Historical Narrative of Fantastic Events during the Decline and Fall of the Provenance"