A New Take on a Tale as Old as Time 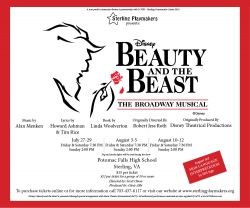 Sterling, VA, July 06, 2018 --(PR.com)-- Sterling Playmakers, a longtime local community theater organization is gearing up for their summer production of Disney’s Beauty and the Beast. The show is set to open July 27, 2018, and will run through August 12, 2018. The cast consists of 75 people and is made up of both children and adults from the surrounding area.

This beloved Disney musical is a well-known “Tale as Old as Time.” Premiering as an animated feature in 1991 it tells the story of Belle, a strong, smart, independent small-town provincial girl who longs to have adventures like those she reads about. Finally achieving her dream while protecting her father, she meets the Beast, once a prince who was cursed for his cold heart, and a castle full of enchanted objects. This curse has a time limit, and as Belle and the Beast grow closer the question looms over them all – will love save them in time?

Premiering on Broadway in 1994, this acclaimed musical features 6 additional songs to the 8 in the animated film, score and lyrics by Alan Menken, Howard Ashman and Tim Rice.

Director Scott Olson is extremely excited and proud to bring to life his interpretation of this classic story. “I think all of us know the story,” Olson says, “but as we get older different themes and lessons stand out to us. By saying a line in a slightly different way or emphasizing a different aspect of a scene or a song, you completely change the meaning for both the actors and the audience.”

This show promises to be a production to remember, with some surprises and scenes that will stay with you long after the curtain call. “We have such an incredible production team,” says Gioia Albi, Producer, “everyone is so talented and creative, and they are throwing their hearts and souls into this show. From costumes and props, to lights and sound and even the house manager, our version of this show promises to transport audiences and immerse them in this magical story.”

Sterling Playmakers’ Disney’s Beauty and the Beast opens July 27, 2018 at 7:30 PM at Potomac Falls High School in Sterling, VA. Tickets can be purchased on their website at www.sterlingplaymakers.com.

A New Take on a Tale as Old as Time