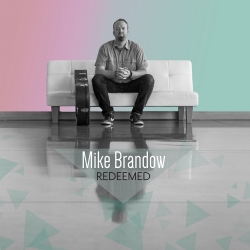 Portland, OR, July 25, 2018 --(PR.com)-- BentBeat Productions announced today that Mike Brandow (mikebrandow.com) released his first full-length Praise and Worship album, “Redeemed.” Northwest-based Brandow has been a worship pastor for 17 years, and leading worship for over 23 years. He is currently based at East Side Baptist Church in Springfield, Oregon.

“Redeemed” is Mike’s first collaboration with Portland-based BentBeat Productions. Brandow first came to the attention of producers Jozi Bently and Dave Beatty in 2016 through a songwriting workshop facilitated by the two. “Mike’s music stood out head and shoulders among the submissions we saw that year,” said Beatty. “We knew immediately upon listening to his work that he had something special.”

The first song that caught the producer’s attention, “At the Cross,” became the featured acoustic track on the album. During the studio recording, the team captured raw footage of the session. The result became a video edited and released this week on YouTube, coinciding with the release of the album.

“With ‘Redeemed’ we wanted to do call back to the days of album format releases, unlike what most digital listeners are consuming today,” said Bently of the project. “Music audiences can easily pick and choose which tracks they want to play. While people can still enjoy downloads of individual songs with this album, we wanted to create an experience to hear the album from beginning to end. This album starts out amping up with ‘Ready’ and takes a journey through music and message all the way to ‘Great and Mighty’ as the final track.”

Along with being the album’s opening song, "Ready" has another first for Brandow: His entire family participated in a single recording. His wife, Lisa, is featured as a vocalist, and his son Jayce participated in a choir that joins the two to finish the track. “It was really great to have my family join me.” Brandow also added, “I want this album to be more than simply Christian music people listen to. I want it to be interactive and engaging. I want people to sing.”

Ahead of the album’s release, singles "Amazing Grace (Your Grace Alone)" and "Forever Redeemer" were made available on music streaming sites. “We were very humbled how people responded to his modern take on the old hymn and equally happy with the upbeat approach of ‘Forever Redeemer,’” Bently said of the preview songs.

Each track features Brandow on vocals and guitars, with Lisa joining him as a vocalist on three of them. “It was really wonderful to see how everyone came together to make this album,” said Bently, who is also featured as a vocalist on two tracks. “Mike and Lisa have been making music together for years, and having that chemistry added something really special to this project.”

Local musicians from Oregon and Southwest Washington were also called upon to give specific tracks their own individual tonal palettes. “‘In Your Presence’ and ‘Endlessly’ come to mind as two extremely special songs because of the beautiful strings and piano that were added to each,” commented Beatty. “The multiple collaborations throughout this album really create an incredible listening experience from beginning to end.”

Brandow will be taking the stage at the Rock the Church Northwest Music Festival on Saturday. The festival is free to attend and runs Friday and Saturday July 27-28, 2018 at Willis Tucker Amphitheater at 6705 Puget Park Drive, Snohomish, Washington. More event info is available at rockthechurchnw.com.