Award-Winning Author Turns to Little-Know Historical Moment for Sixth Novel, "Before We Died"

Two young men battle corruption, the forces of nature, and their own weaknesses - including the issue of their love for the same woman - in the deepest part of the Brazilian jungle in Joan Schweighardt’s new novel. 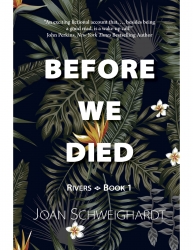 Albuquerque, NM, September 29, 2018 --(PR.com)-- Award-winning author Joan Schweighardt has used the rubber boom that took place in the rainforests of South America in late 19th/early 20th centuries as the historical setting for her sixth novel, "Before We Died" (Five Directions Press). "Before We Died," which is just out, is the first in a three-book “rivers” series that collectively explores the relationships between two households - Irish immigrants and their offspring in Hoboken, NJ, and mixed indigenous Brazilian-European persons in Manaus, Brazil - between the years 1908 and 1929.

"Before We Died," which has been praised by writers as disparate as environmental activist/bestselling author John Perkins and internationally acclaimed historical fiction writer Kristen Harnisch, focuses on the story of two Irish American brothers who leave their jobs as longshoremen in Hoboken, NJ in 1908 to make their fortune tapping rubber trees in Brazil. They expect to encounter floods, snakes, malaria, extreme hunger and unfriendly competitors, but nothing prepares them for the psychological hurdles they face.

Says Schweighardt, “Until British plantations in Southeast Asia began to produce rubber in the early 20th century, the burden was mostly on the dark heart of the South American rainforests to provide the substance. The demand for rubber, due to the growing popularity of automobiles at that time, and the dangers inherent in gathering it in the deep jungle, brought out the worst in the barons at the top of the industry hierarchy and ruined the lives of many people at the bottom. It was the perfect setting for my story of two young men, brothers, struggling to come to terms with the personal losses affecting their own lives.”

Schweighardt is the author of "The Last Wife of Attila the Hun," "The Accidental Art Thief," and other novels, as well as a memoir published under a pseudonym. In addition to completing her rivers trilogy for Five Directions Press, her first children’s book, "No Time for Zebras," will be published in 2019 with Waldorf Press. Schweighardt also edits, writes and ghostwrites for private and corporate clients.

"Before We Died" can be purchased on Amazon and wherever books are sold.
Contact
Joan Schweighardt
505-688-8235
www.joanschweighardt.com