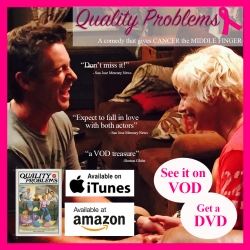 This year 2018 marks the 10 year anniversary of Brooke Purdy’s breast Cancer diagnosis. Ten years ago, she heard the words no one ever wants to hear. From then (through today) she has been carried by her family and her Village and got through it...With a Lot of help. So, here we are 10 years later, she is Cancer free and with her wonderful film, "Quality Problems" to show for it. In the time since her diagnosis she has talked to hundreds of women and their families facing a diagnosis and is hoping that this film, which celebrates Hope and Laughter in a time of crisis will reach many, many more. She is hoping that all people who have been touched by Cancer in any way will gain comfort from this film and join her mission to spread Hope.

"Quality Problems" is about a 40 something couple much like other couples: They have two kids, two jobs, and one boob with cancer. Toss in planning an 8-year old’s perfect birthday party and the only thing you can do is laugh.