Prospanica Houston Recognized as Chapter of the Year for 2018

This is the top recognition awarded nationally by the Association of Hispanic Professionals. 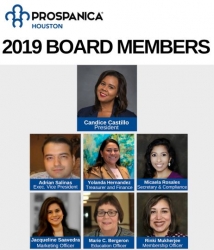 Houston, TX, March 01, 2019 --(PR.com)-- Prospanica Houston was recently recognized as Chapter of the Year for 2018. This is the highest recognition awarded by Prospanica - The Association of Hispanic Professionals fka the National Society of Hispanic MBAs, to only one of the more than 45 chapters throughout the U.S. and Puerto Rico that are part of this national organization.

The announcement was made during Prospanica’s 2019 Leadership Summit celebrated in Hartford, Connecticut and presented to Candice Castillo, Prospanica Houston Board President since 2018. “I feel incredibly honored and humbled to receive this recognition on behalf of our Houston board, membership, and sponsors and partners,” said Candice. “I am so blessed to be part of a team of passionate leaders who work tirelessly to impact and grow our Hispanic professional community.”

This is the first time the Houston Chapter receives this top honor since Prospanica started awarding this recognition in 2007. The selection is based on chapters’ performance on the areas of compliance, financial health, programming & branding, leadership, and membership. “Chapter of the Year is an extremely challenging award to earn,” said Thomas Savino CEO of Prospanica. “Houston distinguishes itself from its peers by being exceptional in many areas. These include having exceptional leadership --both local and nationally, and conducting exceptional programming to a continually growing membership.”

For the past nine years, Houston has consistently performed within the top-10 chapters of the organization. Prospanica Houston is part of the founding chapters that formed the national organization back in 1989. In the history of the Houston Chapter, Candice has been the fifth female and first Afro-Latina president to lead the chapter board.

About Prospanica:
Prospanica is a non-profit organization dedicated to empowering the Hispanic community to reach their full educational, economic, and social potential. The organization was first formed in 1988 as the National Society of Hispanic MBAs (NSHMBA), but outgrew its name, adopting its new name Prospanica in 2016. The organization advocates the pursuit of higher education and advancing Hispanic leadership. Prospanica is The Association of Hispanic Professionals with more than 45 Chapters and hundreds of community partners across the United States and Puerto Rico. For more information on Prospanica, visit www.prospanica.org. To learn more about Prospanica Houston visit www.prospanica.org/Houston.
Contact
Prospanica
Monica Gonzalez-Williams
1-877-467-4622
www.prospanica.org/Houston 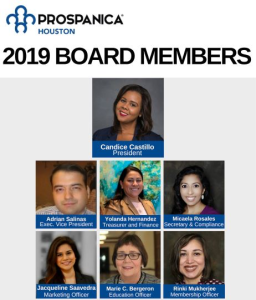