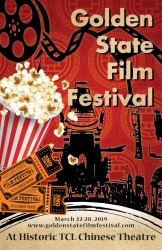 Hollywood, CA, March 11, 2019 --(PR.com)-- The Golden State Film Festival is pleased to announce its opening night party and panel before the start of the second edition of the festival. The event will take place on March 21 at Cabo Wabo Cantina, located above the TCL Chinese Theater. The panel begins at 7pm.

The 2nd Golden State Film Festival is scheduled to be held from March 22-28 at the TCL Chinese Theater, the world’s most renown theater. This year, the festival will host over 300 independent films from across the world. The schedule and details of the opening night party and the panel, sponsored by California Film Commission will be available on the festival website.

Festival Programmer Peter Greene is especially excited about this year’s festival, “We are excited to partner with the TCL Chinese Theater as well as the California Film Commission and hold our festival in the revitalized Hollywood and look forward to an exciting second year of our festival.”

Participants at the panel will discover how to work effectively with the California Film Commission, and 58 local film offices in the state, which are ready and eager to extend all possible help. The audience will also understand how to avoid or resolve problems during filming on location with the help of community outreach and innovative methods.

“If you’re a California filmmaker, this panel discussion is a must! All of us with the festival are excited about this panel and look forward to seeing you at our opening night panel and party,” said Jon Gursha for The Golden State Film Festival.

- 20% off for all festival filmmakers
- $5 Beers, Margaritas & well drink specials

Event at a glance

About
The Golden State Film Festival is intended to serve as an opportunity for emerging independent filmmakers to showcase their talents. It is a competitive event, with exhibitors and prize winners enjoying fantastic exposure before a large audience of enthusiastic film aficionados and high-level industry decision-makers. Filmmakers from across the United States and around the world are eligible to participate, and short-form as well as feature-length works are being considered for entry. For more information, please visit: https://www.goldenstatefilmfestival.com/
Contact
Golden State Film Festival
Jon Gursha
818-633-5404
www.goldenstatefilmfestival.com 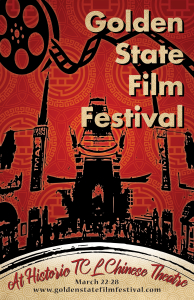