May 10, 2019 release date for a remarkable new book by Joe Broadmeadow and Robert Walason. Walason, one of the most popular characters from Season 1 of Crimetown, relates his amazing story of descent into the world of a Mob enforcer and how he engineered his escape from the life. 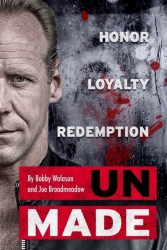 Providence, RI, April 29, 2019 --(PR.com)-- On May 10th, a new and remarkable book is set for release. UnMade: Honor Loyalty Redemption by Robert Walason and Joe Broadmeadow is not your typical Mob crime story. Available now for pre-order in Kindle and in print on release date from Amazon, Barnes & Noble, and local bookstores.

On May 18th, DePasquale Square, Providence, RI, 5-9pm, meet the authors, Robert Walason and Joe Broadmeadow and grab a signed copy of this compelling story.

This is a small glimpse into the book and the troubling tale it tells...

Imagine you are 6 years old, trembling beneath your bed, desperately looking for the one reassuring presence who can save you from your rampaging father. Your aunts and uncles will rescue you again. They will come, standing between you and the raging man who seeks to destroy your innocence.

And you will know them not by their faces, or their voices... but by their ankles. The saviors arrive and the reassuring sight of their ankles bring you hope...

Imagine you are 12 years old on Christmas Eve. Inside, all around you, families wait in quiet anticipation for the celebrations of Christmas. Trees adorned with decorations stand watch over wrapped presents waiting silently for the laughs and giggles of children, young and old.

But for you, there are no presents, no decorations, no Christmas feast. On this Christmas Eve you are alone, cold, and abandoned. Tossed from your home by your father with no one to turn to. Wandering the streets of Providence, wearing pajamas, sneakers, and a thin jacket, looking for a way to survive.

You will spend a silent night in a dark, dank basement in the Providence projects sleeping in an abandoned cardboard box.

Imagine you are 16 years old, sentenced to adult prison. Your reputation for brutal violence draws attention from Organized Crime who lure you in and groom you to be one of them, becoming the “family” you so desperately seek. Years of working as an enforcer for the mob follow, more prison time, and narrow escapes from serious convictions.

Imagine you are being targeted, pursued, and shot by a would-be assassin. Running until you can run no more, you collapse against a car. No longer able to move, or escape. Your blood pours out as the pain bores in.

Imagine the gunman places the barrel of the gun against your forehead, smiles, and pulls the trigger. Click, the gun does not fire. Click, again. And you realize it is not your time to die. Summoning the strength you thought had abandoned you, you lunge at the gunman, chasing him away.

Imagine you survive the horrific damage to your body by that 9mm bullet. You know what you must do and how you will do it, in your own way. All the while knowing no one leaves a mob crew except by disappearing into prison, the Witness Protection program, or giving up breathing.

Imagine confronting the man who now heads Organized Crime in New England, a man unaccustomed to being told anything he did not want to hear, and telling him that letting you leave the life was best for all concerned.

For Robert “Bobby” Walason, this was not imagination, this was his life, and this is his story. A story of abandonment, desperation, rebirth, and redemption.