SMi Group Reports: SMi Group are delighted to be holding the 5th annual Future Armoured Vehicles Central and Eastern Europe Conference in Prague, Czech Republic on 20th and 21st May 2019. 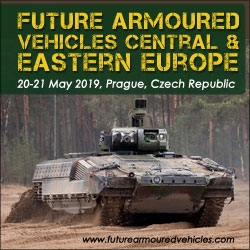 London, United Kingdom, April 29, 2019 --(PR.com)-- In 3 weeks time, the Future Armoured Vehicles Central and Eastern Europe Conference will convene in Prague. Due to limited seats in the venue, registration is closing soon.

With the $2.5 billion defence contract, due to be signed imminently, the Czech Armed Forces can expect to receive the first of their 210 modern Infantry Fighting Vehicles in early 2019; the rest being delivered over the course of the next 10 years – the largest single military purchase for the Czech Armed Forces, as they strive to modernise their land forces by 2026.

Military and industry representatives attending the conference include:

The event brochure with the two-day agenda and full speaker line-up is now available to download at: http://www.futurearmouredvehicles.com/prcom

For sponsorship and exhibition packages available, contact Justin Predescu on +44 (0) 20 7827 6130 or jpredescu@smi-online.co.uk

About SMi Group:
Established since 1993, SMi Group is a global event-production company that specializes in Business-to-Business Conferences, Workshops, Masterclasses and online Communities. We create and deliver events in the Defence, Security, Energy, Utilities, Finance and Pharmaceutical industries. We pride ourselves on having access to the world's most forward-thinking opinion leaders and visionaries, allowing us to bring our communities together to Learn, Engage, Share and Network.
Contact
SMi Group
Shannon Cargan
+44 (0) 20 7827 6138
http://www.futurearmouredvehicles.com/prcom