Actress Keelia McGovern embarks on producing her first film establishing herself in a new generation of women filmmakers. 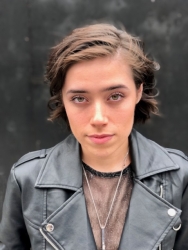 New York, NY, October 14, 2019 --(PR.com)-- Actress, singer, and writer Keelia McGovern embarks on her making her first film "Eating Cake Alone." The film is a creative look into modern romance and touches on themes of loneliness, depression, and love for women in this generation.

In making this film, Keelia is now apart of a new generation of women filmmakers that bring with them their unique insight on culture and art. In recent years Hollywood has paid closer attention to women filmmakers than in past generations. Directors, writers, and producers like Greta Gerwig who was nominated for an Oscar for her film "Ladybird," Anna Boden who co-directed "Captain Marvel" (in which Keelia made a cameo), and actress turned director Olivia Wilde who directed the acclaimed "Booksmart," have been instrumental in putting women like Keelia and their work in film in a brighter spotlight.

The film will be directed by Keelia's Fiance Nathan Clarkson best known for his acting in projects like The Purge and directing work on such indie favorites as The Unlikely Good Samaritan and the upcoming Miracle on Highway 34.

It will be produced by Joseph Holmes.

The film is expected to premier at festivals in 2020.
Contact
Beloved Entertainment
Louis Giovino
818-207-9297
www.lightingdark.com