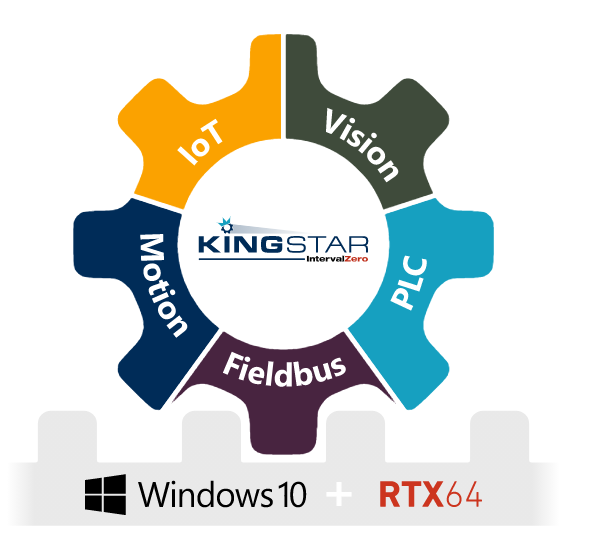 Waltham, MA, October 28, 2020 --(PR.com)-- KINGSTAR, a division of IntervalZero, announced the general availability launch of KINGSTAR 4.0. KINGSTAR is an all-software, complete “plug-and-play” PC-based Machine Automation platform and it offers the most open approach for building smart machine controllers that can deliver on the promise Industry 4.0 & IoT. With this most recent release, KINGSTAR 4.0 significantly simplifies the ability to integrate multiple controllers onto a single standard Industrial PC (IPC) while also allowing the controllers to benefit from all the productivity and the usability benefits of the Microsoft Windows environment.

Being open means the KINGSTAR is committed to supporting open standards such as Windows, EtherCAT, IEC61131-3, OPC-UA, and TSN, which protects customers investment best. Notably, the KINGSTAR Machine Automation Software is the only solution that supports Plug-n-Play EtherCAT – a feature which truly enables the customer to optimize their machine controller for any smart factory setting and frees the machine builder from drive or I/O vendor lock-in. Additionally, unlike other software-based controllers in the industry, KINGSTAR allows third party IoT software – like Microsoft Power BI – to run on the machine controller and thus enables it to become a smart edge controller.

To meet the IoT demands of the market, machine builders are increasingly required to integrate their machine controllers with other controllers in a work-cell setting, to support concurrent real-time network connectivity like EtherCAT and GigE Vision, to connect to the cloud via OPC-UA in order to capitalize on AI (artificial intelligence), and to simplify the machine user experience to make it more intuitive. “KINGSTAR 4.0 directly addresses key emerging challenges that machine builders face when their engineers add machine automation functionality that supports Industry 4.0 requirements,” said Jeff Hibbard, CEO of IntervalZero.

KINGSTAR version 4.0 has been architected to allow developers to select only the functionality they need for the scope of their project and to quickly assemble the system by relying on its plug-n-play capability. EtherCAT now serves as the foundation for KINGSTAR and release 4.0 rounds out many features that the market seeks. In some cases, engineers may simply require the EtherCAT fieldbus, while other projects may require a software PLC to serve as state machine functionality between multiple controllers. KINGSTAR’s flexibility is provided through feature packages allowing engineers to expand their own product features at any time by adding functionality to the existing KINGSTAR Fieldbus Runtime.

The key features in the KINGSTAR 4.0 release are:

KINGSTAR, an IntervalZero company, is headquartered in Waltham, Massachusetts and has offices in Nice, France; Munich, Germany; Puna, India; and Taipei City, Taiwan. The company is a member of the EtherCAT Technology Group, PLCopen, OPC Foundation, Can in Automation (CiA), Mechatrolink Association, Intel Embedded Alliance and Microsoft Embedded Partner. IntervalZero’s customer-centered philosophy combined with more than three decades of embedded software innovation and the proven value of its RTX/TX64 hard real-time software have enabled the company to build a global customer base of market-leading OEMs and end users in Industrial Automation, Medical Systems, Digital Media, Test & Measurement, Military & Aerospace, and other industries.