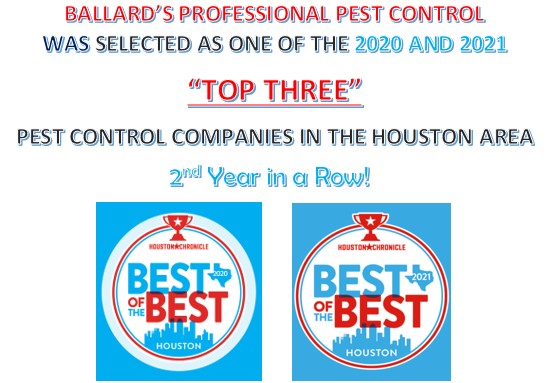 Houston, TX, June 26, 2021 --(PR.com)-- A city-wide contest hosted by the Houston Chronicle newspaper to name the “Best of the Best” in each industry category ended last month and the results are in.

Those who are familiar with Ballard‘s know they are an icon in the industry.

Ballard’s has served the northeast areas such as Humble, Kingwood, Atascocita, Cleveland and Huffman, as well as the northwest parts of town like The Woodlands, Spring, Conroe, Tomball and even the Champions area for over 36 years.

Created in 1985 by Larry Ballard and joined by his wife, Donna, whom he married a month later, the Ballards have been working in the pest control industry for a very long time, despite economic downturns, hurricanes, floods, ice storms, and the like. They have persevered through all and helped their customers rebuild and repair many times.

The popular movie quote, “Who you gonna call?” is fitting for the well-known “pest busters” with offices in the Kingwood and Porter area.

According to Donna Ballard, “We were honored to learn that not only were we nominated, but we beat out some of the heavy hitters and biggest names in the industry. As a mom and pop locally owned business, we take pride in our staff, some of whom have been with us for over 19 years.” When asked what she believes the reason for their success is, she replied, “Customer service is the main reason. The other is the personal touch we like to give our customers, many who are almost like family because they have been with us for so long.” Many customers ask for their favorite technicians by name and enjoy knowing that they are in capable hands.

Donna is very civic minded and has been selected as “A Woman of Achievement” by Family Time Foundation, Rotarian of the Year by the Kingwood Rotary Club and is an active member of the Kingwood Civic Club. “I believe in 'paying it forward' and I try to live by that philosophy every single day,” said Ballard.

Larry Ballard also nicknamed the “bug whisperer” by many local real estate agents, has an impressive and proven record of performing over 32,000 WDI (Wood Destroying Insect) inspections in his career as a termite inspector. If you are buying, selling, or refinancing a home, you definitely want Larry Ballard doing your inspections.