The National Lighthouse Museum’s mission is to collect, preserve, and display objects related to the history of lighthouses throughout the United States. On August 7, 2021, they are hosting their 11th Annual Lightkeeper’s Gala at the Historic Pavilion on the Terrace (est. 1835). Join them as they honor friends & supporters of lighthouses & the museum. If you are unable to attend, your support is greatly appreciated. Please see the details below for more information. 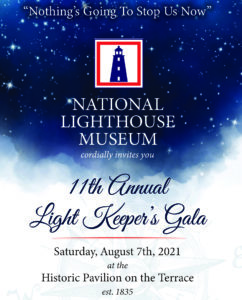 Staten Island, NY—The National Lighthouse Museum is located on the site of the US Light House Service General Depot. Partnering with government agencies, non-profits, and corporations promote historical, educational, and recreational activities at the site, and maintain the navigational and maritime heritage of lighthouses worldwide. Through donations from events, the National Lighthouse museum preserves and documents historical and technological objects of lighthouses in the US and maintain an archive of artifacts related to lighthouses.

Betsy Dubovsky’s career was dedicated to the not-for-profit community. Dubovsky was the Executive Director of the Staten Island Foundation from 1998 - 2021. The Staten Island Foundation, whose efforts focus on promoting equity and improving health, education, the arts and community programs, has been an invaluable supporter of the National Lighthouse Museum. Dubovsky was the recipient of numerous awards and honors throughout her service, and in 2013 was awarded the degree of Doctor of Humane Letters, honoris causa, by the College of Staten Island in recognition of her Island-wide impact. Dubovksy’s husband will receive the award in her memory.

Ole Anderson was the Light Keeper of the Twin Lights from 1903 - 1928. He started as the 1st Assistant and was later promoted to Principal Lighthouse Keeper in 1917. The Twin Lights (est. 1862), located in New Jersey, overlooks Sandy Hook and the New York skyline, and is a significant part of New York maritime history. Anderson’s career as a Light Keeper started in 1898 as the 2nd Assistant at the Statue of Liberty, and he was transferred and promoted in 1899 to Principal Lighthouse Keeper at Orient Point in Suffolk, NY. Anderson’s family will receive the award in his memory.

Thomas Tag has been involved with lighthouse research for 20-plus years. He has done scholarly research concerning lighthouses and has written numerous technical articles, including articles for The Keeper’s Log. Tag is the Technical Advisor to the United States Lighthouse Society and serves on their Board of Directors, and is chair of the American Lighthouse Council Artifacts & Technical Advisory Panel. Tag is a holder of the Ross Holland Award from the American Lighthouse Council.

Pam Silvestri is a successful journalist and Food Editor for the Staten Island Advance. She is one of the founders of Fig Fest, which is a gathering of local fig growers and fig aficionados. Fig Fest has become an anticipated annual event at the museum, and is an integral part of the museum’s fundraising efforts. Silvestri is one of the founders of Uncorked! Food & Wine Festival, an event hosted by Historic Richmond Town, and has an award named in her honor as part of the annual event.

Tickets are on sale for $200 per guest. To purchase tickets or to become a journal sponsor, please visit https://lighthousemuseum.org/events/. For more information on the museum, volunteer opportunities, donations or our lighthouse artifacts please contact Linda Dianto our executive director.
Contact
National Lighthouse Museum
Linda Dianto
718-390-0040
lighthousemuseum.org