Barrington, IL, October 28, 2021 --(PR.com)-- Native ChocTalk, a Podcast by Natives for All, debuted in August of 2021 and has gained fast acclaim. The podcast series is the creation of host, Rachael Youngman, a member of the Choctaw Nation of Oklahoma. The series focuses on preserving stories of all Native American experiences by those who have lived them, honoring the lives of Indigenous ancestors, and ensuring that the history and culture of the tribes lives on for future generations. New episodes premiere weekly and are available on the Native ChocTalk website (nativechoctalk.com) and on Apple Podcasts, Spotify, SoundCloud and Podbean.

In anticipation of the upcoming holidays and family gatherings, Youngman and Seth Fairchild, Executive Director of the Chahta Foundation, share a joint message encouraging all families to come together over the holidays and to record their stories and ancestral history. The Chahta Foundation, a non-profit that supports education and culture within the Choctaw Nation, also records the history of Native elders. On that podcast, dropping November 4th in honor of Native American Heritage month, the two discuss methods of researching family lineage and share some interesting accounts of Rachael’s own Choctaw family.

- Kiowa artist Monroe Tsatoke sharing thoughts on being the descendant of one of the Kiowa Five, the famed Native artists of the Kiowa tribe who received international acclaim
- Chief Gary Batton of the Choctaw Nation revealing stories of his own ancestors and about the Choctaw spirit of “faith, family and culture”
- Comanche Rance Weryakwe singing a Comanche hymn and talking about the historical lands of Oklahoma
- Francine Locke Bray, Choctaw, sharing her experience caring for Choctaw ponies, descendants of the very few that survived the Trail of Tears.

“I began Native ChocTalk as a way of connecting Native Americans and non-Natives with the history and culture of our people,” says podcast creator and host Rachael Youngman. “A podcast is basically a modern platform for storytelling and a way to continue the oral traditions of the Choctaw and other Native tribes whose family and tribal histories are passed on through the spoken word. With each elder that passes, our historical accounts and traditions fade away. Native ChocTalk is a way of preserving these stories so that future generations remain connected to our culture.”

Youngman, who was raised in Oklahoma, formerly served on the Board of the American Indian Center of Indiana (AICI). She has deep connections within the Native community. “I grew up in Anadarko, Oklahoma which is known as the ‘Indian Capital of the Nation,’ home to more Native Americans per capita than anywhere in the world,” says Youngman. “My dad worked as an art teacher at Riverside Indian School, the oldest and one of the few remaining Native boarding schools in the country, now known for teaching Natives their culture and language - a far cry from the boarding schools of many years ago. Yet my own understanding of what it means to be Choctaw went through a significant shift when I learned my great grandmother Ella’s story - about being sold into slavery by her mother at the age of three to one of the wealthiest landowners in Oklahoma. Ella’s story would have been ‘dust in the wind’ - like thousands of other Native American stories that have vanished - had I not spent a decade researching her story and those of so many others. I want to share those stories and encourage others to do the same. Native ChocTalk lets us do that to as wide an audience as possible.” 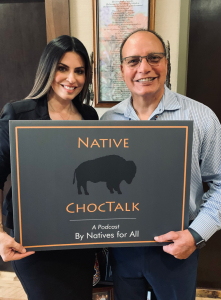