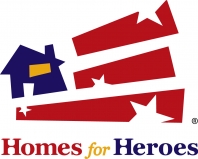 Homes for Heroes® Company Profile
Mission Statement
Our mission is to provide extraordinary savings to heroes who provide extraordinary services to our nation and its communities every day. Heroes are current and former firefighters, law enforcement, military, healthcare workers, emergency medical services and teachers.
Message from Ruth Johnson, CEO / Founder
Through our amazing national network of affiliates, heroes have saved over $17.5 million on their real estate transactions. It’s our way to say “Thank you.” Year-over-year growth has continued in 2016. We launched our new website and we are working toward building additional relationships with national hero organizations. With continued growth, we also prioritize finding the right employee talent and affiliate partners to assist in reaching more heroes and providing them with Hero Rewards®.
Homes for Heroes® Company Summary
Homes for Heroes, Inc., is the largest nationwide hero savings network of affiliate real estate specialists and businesses committed to providing significant savings in the form of Hero Rewards®. Heroes receive Hero Rewards when they work with our affiliates to buy, sell or refinance a home; or when they make every day home-related purchases. Hero Rewards is our way to say “Thank you” to local heroes for all they do for our nation and its communities.

2002: Homes for Heroes, Inc. was established in Minneapolis, MN shortly following the tragic events of 9/11 as a way to give back to local heroes for all they do. The founders are current CEO Ruth Johnson and family members Kacy Mlenar, Helen Johnson and Mark Micek. They obtained the trademarks and served the first heroes.

2002-2008: HomesForHeroes.com was launched. The company went through extensive market testing to prove the business concept, and expanded into a multi-state program.

2009: Hired its first employees and with over 100 affiliate real estate partners, launched
the program nationally. Homes for Heroes, Inc. also created and established the Homes
for Heroes Foundation nonprofit 501(c)(3) to further assist heroes in need.

2010: Achieved the benchmark of more than 100 heroes served.

2011: Achieved the benchmark of more than 500 heroes served, and brought on its first
Board of Advisors.

2012: Had given back over $1 million to heroes, and over 500 affiliate real estate
specialists were part of the program.

2015: Had given back over $10 million to heroes. Company received trademark approval
for Hero Rewards® and the Friends of Heroes program evolved to “Local Business
Affiliates” under the Homes for Heroes parent brand.

Today: More than 2,100 affiliate real estate partners in 49 states have worked with over
10,000 heroes and provided them with Hero Rewards totaling over $17.5 million

Received the Minnesota Business Magazines Award for Social Entrepreneurship in 2010.