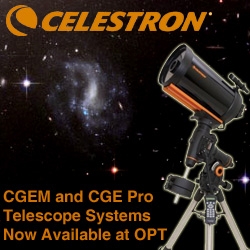 Oceanside, CA, June 23, 2009 --(PR.com)-- OPT is pleased to announce the recent addition of the CGE Pro and CGEM telescopes and equatorial mounts from Celestron. The CGEM is an exciting new mid-level option for amateur astronomers, while the CGE Pro is a professional level mount for serious visual and imaging applications.

The Celestron CGEM mount is an affordable mid-sized computerized equatorial mount with a 40 pound payload capacity and solid tracking accuracy for both visual and imaging applications. It features the NexStar computer control technology with a 40,000 object database and the ability to connect to a computer for even greater abilities. The Celestron CGEM mount also features the new All-Star polar alignment technology for fast and accurate polar alignment. This new mount is ideal for those interested in astrophotography and imaging applications, or for those that want to upgrade their current system.

“I took the new Celestron CGEM mount out for a test run and I have to say that I was very impressed with its performance,” says Chris Hendren, an OPT telescope expert with years of CCD imaging experience. “The mount is easy to align and landed targets almost dead center. The EQ head had very low backlash, and the whole package seems well built with attention to detail. An excellent value!”

The Celestron CGE Pro mount is the new flagship computerized equatorial mount from Celestron, featuring a 90 pound weight capacity and high precision tracking system. This observatory class German equatorial mount is ideal for larger telescope systems and was engineered from the bottom up with imaging in mind.

“The Celestron CGE Pro equatorial mount is an excellent new addition to the Celestron lineup. The mount is exceptionally stable and can carry up to 90 pounds,” states Craig Weatherwax, owner and CEO of OPT. “With high precision tracking, the CGE Pro is perfect for serious astrophotography and CCD imaging. It is also thousands less than competing equatorial mounts, making it one of the best values in high-end equatorial mounts.”

Both the Celestron CGE Pro and the CGEM are available as an equatorial mount only, or as complete packages with Celestron’s industry leading SCT telescopes. Initial availability is limited due to high demand, yet Celestron is increasing production and both systems should become more available over time.

About OPT – OPT is a leading retailer of telescopes, optics, cameras and accessories for both amateur and professional level astronomers. OPT carries thousands of products from the top manufacturers in the industry. The company employs a number of telescope and imaging experts who have the knowledge and experience to assist consumers and professionals alike. OPT has been in business since 1947.