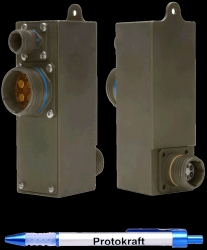 Protokraft has introduced the Neptune Series of Ethernet Optical Media Converters with M28876 optical interfaces, designed for naval, military, industrial or utility applications where significant levels of shock, vibration and extreme temperature ranges are experienced. These components integrate the functions of optical transmitters and receivers into the shell of a standard M28876 optical connector along with the Ethernet media conversion circuits. These components are intended for use in outdoor applications where small size, weight reduction and resistance to harsh environments are valued.

This e-mail address is being protected from spam bots, you need JavaScript enabled to view it.