Chad Kaczowski from Koba Ryu Karate wins at the Mohegan Sun Casino Rumble at the Sun. 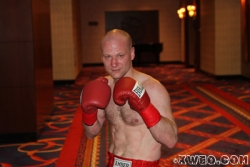 Amateur fighter’s Chad Kaczowski Koba Ryu Karate in the red corner from Adams, MA. and his opponent Leonardo Salgodo Team Tampubolon out of the blue corner from New York, NY.

PJ Rogers trainer and fighter from Koba Ryu Karate and Chad’s wife Danielle Kaczowski were his corner, which made his win successful.

Chad Kaczowski, age 38, made a comeback to the sport of kickboxing after a 10 year break and winning the USKBA New England Super Featherweight Championship. Chad thought long and hard about getting back in the ring again and said "I only have a couple more years left if I want to compete and I want my kids to see me fight since they haven't had the opportunity before."