This Summer, EBE Ensemble brings "Shakespeare in the Pagoda" to Prospect Park, with free productions of Romeo & Juliet and Julius Caesar in repertory with a company of 12 actors. Performances begin July 24 at the Prospect Park Music Pagoda.

EBE Ensemble is dedicated to developing and presenting new and unique works of theatre. They believe that making theater accessible enhances a community and that, through an ensemble-based approach, they can better present quality theatre that strives for an emotional truth. Now finishing their third season, EBE Ensemble has produced several new plays and adaptations and created the “You Fill in the Blank” play festival and competition in addition to the award-winning national one-act festival, Elephants on Parade.

The Music Pagoda is located in Prospect Park, next to the Boat House, near the Prospect Park subway station on the B, Q or S trains.

Admission is Free. Folding chairs may be rented in advance for $3, or $5 at the park (subject to availability). For more information, please visit www.ebeensemble.com/shakespeare/.

Each show runs approximately 90 minutes without an intermission 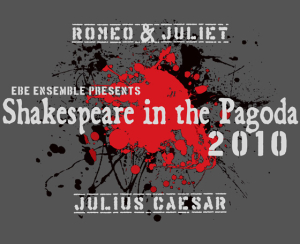 Shakespeare in the Pagoda