Celebrate the last holiday of the summer with a BBQ cookout catered by Bubbalou’s BBQ. 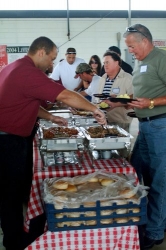 Altamonte Springs, FL, August 26, 2010 --(PR.com)-- Whether it’s a large event that calls for professional catering or a family backyard barbecue that is need of a Party Pack, Bubbalou’s has plenty of grilled meats infused with their signature flavor, delectable side items and more for party planners to choose from.

“You got the kids back in school now it’s time to take a break and let someone else do the cooking,” said Bucky Weston Celebrate the last holiday of the summer with a BBQ cookout catered by Bubbalou’s BBQ, owner of Bubbalou’s in Altamonte Springs, Florida. “We handle everything so all you have to do it sit back, relax and enjoy your guests.”

Voted Central Florida’s #1 BBQ and catering company by CNN & Food Network, Bubbalou’s is a multi-award-winning BBQ restaurant that has been recognized by The Orlando Sentinel and Orlando magazine. Both publications voted for Bubbalou’s as the Best BBQ Restaurant in Orlando and Central Florida.

“This year, our loyal fans have once again voted us the best BBQ and best ribs in Orlando. We are proud to be considered the best tasting BBQ in town! And we give our fans and customers nothing but the best when they come into the restaurant and dine in, pick up a Party Pack to go or hire us for a catering event,” said Weston.

View Bubbalou’s catering menu and Party Packs to plan your Labor Day barbecue. Visit Bubbalou’s on the Web at www.bubbalouscatering.com

About Bubbalou’s BBQ:
Since 1986, Bubbalou’s has been serving Central Florida’s best BBQ. The winner of numerous food awards including The Orlando Sentinel Reader’s Poll Best BBQ 14 years in a row, Best BBQ Dive in America by the Food Network, Best BBQ by Orlando Weekly readers and Best Ribs by Orlando Magazine, Bubbalou’s BBQ Restaurants also offers award-winning catering service for Orlando and Central Florida. Bubbalou’s catering menu has various barbecue favorites from Hamburgers to their famous barbecue Chicken, Beef, Pork, and mouth-watering Ribs, all smoked and cooked to perfection. In addition, you’ll receive Bubba’s best Baked Beans, creamy Cole Slaw, and oven-baked Brownies. Bubbalou’s Catering service is second to none for the Orlando and Central Florida area. See for yourself how Bubbalou’s Catering service can liven up any office party, wedding, picnic, or other special event.