A rockin’ event with live music by The Wild Snohomians and Blacktop Deceiver, a meet and greet with the films director, cast and crew as well as actual hot rods and gassers from the movie. Doors open at 7:00PM. Film screens at 9:30PM. 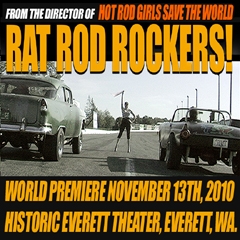 Everett, WA, September 09, 2010 --(PR.com)-- Hot Rod Girls Save The World Writer & Director, D.A. Sebasstian and Go-Kustom Films have scheduled the premiere of their next Lo-Fi Hot Rod Epic - Rat Rod Rockers! for November 13th, 2010 at the Historic Everett, Theater in Everett, Washington http://www.everetttheatre.org Rat Rod Rockers! is not a prequel or sequel to the campy Hot Rod Girls Save The World, but does take place in the same fictitious town, Anywhere, Washington.

The story begins when an area moonshiner named Old Man Kanker, dies mysteriously in a still explosion. A dysfunctional Seattlite family, the Milldues, buy the home not knowing that millions of dollars in moonshine money are buried somewhere on the premises. Ivan Molotov (Kerry Murphy), the local Russian Mob Boss, sends a gang of his thugs to retrieve the money. When the gang runs into serious resistance from the new home owners - all hell breaks loose. The violence escalates as the family refuses to budge or let the Rat Rod Gang on their property. The film features car chases, drag racing, kidnapping, and shoot outs, but all with a darkly humorous tone.

Said Sebasstian about Rat Rod Rockers! "I learned so much from my five years of working on Hot Rod Girls Save The World. I want to apply that to Rat Rod Rockers! and make a leaner and meaner film in one fourth the time. This one is going to be much more streamlined with less dialog and no space aliens or zombies. This isn't to say Rat Rod Rockers! will not have a sense of humor. I always felt that Hot Rods are in fact a kind of exaggerated automobile, almost cartoonish. But not in a Baby Huey kinda way. More like a Hell Boy, Dark Knight or Sin City kinda way. I always associate Hot Rods with the TV Show The Munsters that's where I first saw them when I was a kid. Let other Directors make The California Kid Part II - I like my Hot Rod films campy."

Principle filming for Rat Rod Rockers! was completed in December 2009 and the film has been in post production since then. Sebasstian is doing the soundtrack himself (like he did for Hot Rod Girls Save The World) with guest vocalists Miss Paula Flava and Nikki Alonso. Rat Rod Rockers! is scheduled for a November 13th Premiere in Everett Washington at the historical Everett Theater. Additional screenings are in the works for Seattle, WA., Portland and Medford, OR. and San Francisco, CA. winter and spring 2010-2011.

Rat Rod Rockers! will not go directly to DVD like Hot Rod Girls Save The World did, because of pirating problems (Hot Rod Girls Save The World was pirated a documented 84,000 times, losing over $300,000 in potential revenue). The film will be shown at four wall events and possibly be made available as a mobile device download (iPhone, iPad, etc) in the initial pre-DVD release stage. This will be to limit initial pirating of the film.

Live music for the event will be provided by rockabilly blues band, Blacktop Deceiver and The Wild Snohomians, a rockin’ roots and garage style five piece.

Additional information and film clips and pre-sale tickets links (when available) are at the Rat Rod Rockers! website: http://www.ratrodrockers.com