How can you tell if a TV producer is capable of making a quality, compelling commercial for your business? Award-winning affordable TV ad agency Cheap TV Spots announces five advertising tips for SMBs and entrepreneurs. 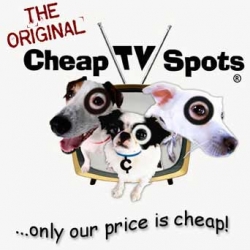 Los Angeles, CA, April 11, 2011 --(PR.com)-- Before you choose a production company or advertising agency, be sure they can do the job right. Award-winning affordable TV ad agency Cheap TV Spots announces five advertising tips for SMBs and entrepreneurs to help them make the best choice.

The web is littered with people who call themselves TV producers or ad agencies. Most don't have real TV experience, except in some field only remotely related to television, like wedding video, amateur YouTube postings, or flat screen sales at a big box store. They may pretend that their steaming pile of video is a TV ad (undetectable to the untrained eye), but they are inevitably missing vital components of a real TV commercial. These missing technical components will stop your ad from being accepted by networks and getting on the air.

TV networks consider commercials part of their programming. Bad ads make the network look bad. Networks reserve the right to refuse to air an ad if it doesn’t meet technical standards, contains inappropriate images or claims, or even if it seems sloppy.

“With ten years of successful TV productions to back them up, the advertising agency in the ultra-affordable category with the experience to produce quality TV commercials that consistently perform to all broadcast technical standards is Cheap-TV-Spots.com,” says company spokesman, Jim Whelk.

2). Integrity: High Standards of Conduct on Your Behalf

Using an untrained producer can be dangerous. Most amateur producers are ignorant of the laws regarding copyright and usage of images and music, and are more than happy to grant the advertiser “ownership” or “use” of video that they themselves have no legal right to use. Ultimately, they expose the advertiser’s company to a potential lawsuit when the real owners of the images discover the impropriety. Surprise, a big legal bill for you.

If you Google “TV advertising” you’ll find lots of amateurs (and even a few search engine poseurs) pretending to be television producers and ad agencies. Most are not even close to being qualified to create your ad message. Some are swindlers who don't pay their videographers, let alone deliver your commercial as promised. And even if you do get it, the joke’s on you - if the videographer isn’t paid, he still owns the footage, even if it’s a video of you. Surprise, again! That’s the law in the United States.

“The Cheap TV Spots team is well-versed in media law and industry practices, and the company holds itself and its associates to the highest standards of conduct and professionalism,” says Jim Whelk.

3). Awards: Accolades and the Respect of Peers

All you want is an ad that brings in the customers, and puts your business in its best light. Less-talented producers may scoff at awards, claiming a great looking ad isn’t necessary. But look out: if your producer can’t create ads that are interesting to watch, then your customers will change the channel when your ad comes on.

Sure, one or two dusty plaques on the wall may not mean everything; what counts is consistent performance, year after year.

With over 180 international TV advertising awards presented by a jury of advertising peers in honor of the high quality of its low cost productions, Cheap TV Spots is well recognized among its industry peers. The same award-winning producers who created these award-winning commercials create unique, memorable Cheap-TV-Spots TV commercials for a low, flat fee. “Advertisers can take advantage of our high quality and low flat fees,” says Whelk.

Ever read the latest hot SEO tactics, only to find another article that trashes those same techniques? Promoting your business in these challenging times can be tough and confusing. Web-based advertising can be surprisingly ineffective, and you’ve probably seen it yourself: the pizza parlor click-through ad next to an article about funeral parlor improprieties, or a car sales link next to an article about a car recall.

Avoid the online SEO “mystery stew” of sneaky black-hat tactics that simply cost money, time, and embarrassment, and at best only rank you among a long list of your competitors - and at worst, cost you customers.

If you're spending $10K, $20K or even more per month on online advertising, maybe it's time for a change. You could spend just a quarter of your current online budget and reach thousands of local customers with a full-screen, memorable message that presents your product or service with style and entertainment value. Who offers this magic advertising medium? Television. If you are looking for affordable, high quality TV advertising, Cheap-TV-Spots.com wants to hear from you.

All those amateur TV producers and advertising newcomers got their sales pitch from somewhere - likely copied from established TV ad agencies. Trouble is, they don’t really understand what is involved in making a broadcast-ready commercial.

Ask yourself: does this producer have a track record of quality TV ad productions? What do they know about air time (a red flag - maybe they’ve never aired an ad before)? Any awards or testimonials? Do all of their productions look the same? Are they leaning on the crutch of boilerplates or templates?

Cheap-TV-Spots.com is the originator of the international online TV ad agency model in the discount category. With ten years in business and thousands of original TV commercials produced and aired in seven languages, no other agency has more experience and success in this sector. “CheapTVSpots.com remains the one-and-only affordable online agency serving the national and international markets with proven reliability and quality,” says Whelk.

Academy Leader, Inc. is a multi-faceted multi-national media company that spans motion pictures, television, publishing, radio, and new media. The agency has won over 180 national and international awards for its original commercial productions, including 15 Telly Awards.