Ocracoke's Curse - the Mystery at Teach's Hole by Mark Duffey

Raleigh, NC, July 01, 2011 --(PR.com)-- On November 22, 1718, Lt. Robert Maynard of the British Royal Navy defeated and beheaded the infamous pirate, Blackbeard, at Ocracoke Inlet off the coast of North Carolina. Hundreds of years later, it is said that Blackbeard’s spirit haunts the area, searching for his lost head and seeking revenge for his untimely death.

Mike Callahan, a local store owner in Wilmington, North Carolina, has always been a friendly, dependable, family-man. That is, until a fishing trip in the Ocracoke area turns his world upside down.

As an unimaginable force moves into the town of Wilmington, Mike’s friends and family witness the downward spiral of a man’s resolve, and scramble to find answers to questions they never thought they’d have to ask. But with time no longer on their side, and devastating events looming on the horizon, can they save Mike from himself or will it take nothing short of divine intervention to rescue Mike from a fate worse than death?

With heart-stopping action and a twisting plot that’ll keep you on the edge of your seat, Ocracoke’s Curse – The Mystery at Teach’s Hole is a gripping story of how one man’s thirst for vengeance – even after death – can take over the lives of many, forever altering their view of reality.

Now available as a paperback on Amazon and an ebook (nook and kindle) at the following: 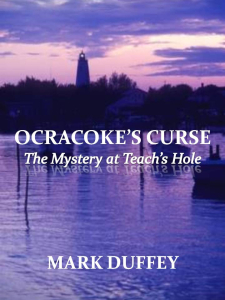