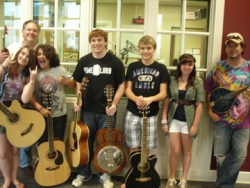 Five students from Bill Wright’s Guitar Studio in Sparta, NJ performed live on air at WNTI radio station early Friday morning on July 29th. They played so well that they were asked to warm up for Commander Cody at the August 12th WNTI/Kennedy Events Summer Concert. The students were Chiara Savastano on vocals and tambourine, Emily Wright on background vocals and bass, Raphael Krause on guitar and tambourine, Ryan VanVliet on slide guitar and Cullen Walsh on guitar. The group opened up with Dylan's Forever Young, then did a bluegrass number called June Apple and closed the performance with another Dylan classic Knocking on Heavens door. In addition to the performance the students were interviewed regarding their musical backgrounds and plans for a possible career in music. Each student was given a CD recording of the broadcast. For more info go to www.billwrightmusic.com or call 973-729-7900. To hear a recording of the the broadcast go to www.wnti.org and click on WNTI highlights.