Level 5 Motorsports Revved Up for Enduro Appearance After Missing Silverstone

The team has made podium finishes in some of the biggest races of the past year, including the 24 Hours of Le Mans and the Six Hours of Imola. Last month, the crew competed in the four-mile Road America circuit for the sixth round of the ALMS season and won its class, which continued Level 5’s undefeated record in American Le Mans Series competition this year. 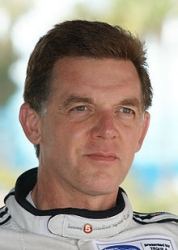 Overland Park, KS, September 18, 2011 --(PR.com)-- Scott Tucker was determined to race Level 5 Motorsports’ new HPD ARX-01g car as soon as he could. That determination was evident when he and his team decided to wait until the last possible minute to make a final decision on the Six Hours of Silverstone race: It was all or nothing. Unfortunately, cost-capped wheels for the car weren’t available in time for Level 5 to maintain its entry in Silverstone; Tucker withdrew. “I knew there was a risk in waiting for the parts, with them not being guaranteed,” Tucker says. “But the car is undoubtedly the best vehicle performance-wise that we can get, so I was determined to give it a shot. The HPD engine and chassis combination has proved to be the best over the years. We feel very comfortable and confident in making this unprecedented and decisive move.” Determination, risk, and refusing to settle for anything but the best—sounds a bit like racing.

Calculated decisions and ultimate control are part of what makes drivers successful, and Level 5 has had its fair share of success. The team has made podium finishes in some of the biggest races of the past year, including the 24 Hours of Le Mans and the Six Hours of Imola. Last month, the crew competed in the four-mile Road America circuit for the sixth round of the ALMS season and won its class, which continued Level 5’s undefeated record in American Le Mans Series competition this year. In that one weekend, Tucker, the reigning ALMS LMPC champion, tackled six races in four different series. He earned podium finishes in the IMSA Prototype Lites, IMSA GT3 Challenge by Yokohama and SCCA Pro Racing Trans-Am races, and he won the Trans-Am T2 class, his 55th career victory in international competition. Co-driver Luis Diaz earned his 10th career ALMS victory. “As far as I know, the championship is now locked up,” team manager David Stone had said.

Even so, as Tucker and co-drivers Christophe Bouchut and Luis Diaz hit the road with the new HPD ARX-01g at the LMS enduro today, they’ll have plenty of catching up to do after taking Silverstone off. “As a team, you never want to miss a race, a practice or a chance to prepare,” Tucker says. “But we’re really looking to perform well and get acquainted with the HPD ARX-01g at Mazda Laguna Seca so we can look ahead to Petit.”

While considering options for the Silverstone race, Level 5 was given the option to compete with the HPD ARX-01g using grandfathered-in specifications, but the team ultimately decided that racing with modified specifications on the car would defeat its purpose. In order to prepare the car for the six-hour LMS enduro today, additional mechanics flew to the Wirth workshop in England last week. When it was finished, the car got a one-way ticket to San Francisco.

Preliminary tests with the HPD ARX-01g were promising, with all three drivers optimistic about the weekend’s race. Especially important was calibrating the drivers’ balances with the new vehicle. Tucker, who began his driving career in 2006, has been known for his unwavering balance since he began. At his first appearance in Le Mans, the Super Bowl of motorsports, he cranked more than 200mph—in the dark— with an Audi R10, the first American to be behind an Audi turbodiesel’s wheel in competition. His decision to skip Silverstone hearkens the same calm confidence. With a winning year already clinched, committing to the Six Hours of Silverstone in the old car just wasn’t as valuable as the possibility that Level 5 might be able to drive its HPD ARX-01g. Just as in races, Tucker set his sights on a goal and let the situation unfold. Although the Silverstone absence meant lost time and points, Tucker and his team are just gearing up for a winning finish to an already dazzling year.

To make up for lost time and points, Level 5 plans to contest the final two ILMC rounds in Atlanta and China.