Visual artist, culture documentarian and independent filmmaker, Muema, turns to crowdfunding for his first feature film House Music Movie, a documentary about the past, present and future of the electronic music world. 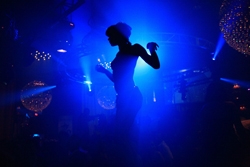 Muema has been working on this documentary about house music for the last four years. Now he is in the post-production stage and he’s really excited to bring this dream to fruition. He’s not doing it alone. Deeply committed to this project, four members of the team (Director, Editor, Co-Producer and Music Supervisor) have been contributing their time over the last two years to make this film happen. Having already wrapped shooting, he is now at a critical moment in post-production and editing.

In line with Rockethub.com guidelines, artists have a set number of days to raise all the funds. Muema has a 60 day fundraising window, from start to finish to raise the budgeted amount ($115,000).

To date, the film has been shot on a myriad of cameras including the iPad, the iPhone, the Sony PD-170, the Canon 5D, the Canon 5D MKii, the Canon 50D, the Lumix DXC-LX3, and the Sony DCR-HC62. If the film is successfully funded, Muema expects to complete the final cut by Q2 2012. To learn more about the film, readers can visit the project’s pitch page here:

About Muema:
Muema is an award winning visual artist.
· First Place Winner: Texas Photographic Society, Best Shot Competition 2011
· Winner, PDN Magazine: The Scene, Amateur Single/Clubs – Nightlife 2011
He is also is the Founder and Managing Editor of BounceFM.Com, a NYC-based house music blog that celebrates art, music and culture. He has served as the official photographer of the Italian Music Conference in Rimini and Sicily, and for the past nine years has been photographing Benny Soto’s 718 Sessions NYC house party featuring resident DJ Danny Krivit. His photographs have been published in Time Out New York, Vibe, Nueva Luz, Fraction, PDN and New York magazines. His photographs were also featured in a 2011 Brooklyn Historical Society exhibition.