The name Frank Hague and Jersey City are inseparable, making it almost impossible to discuss one without at least mentioning the other. Frank Hague served as the mayor of Jersey City for much of the early twentieth century. While some believed him a thief, others viewed him as a modern-day Robin Hood. He could put food on your table or triple your taxes, give you a job or end your career. He could make you a federal judge, a congressman or even a United States senator. 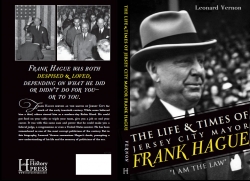 In his new biography The Life & Times of Jersey City Mayor Frank Hague: "I Am the Law" (The History Press) author Leonard Vernon reexamines Hague's deeds, prompting a new understanding of his life. Vernon makes the point that many writers have taken liberties in describing Hague having presented an unfair portrait of the man. As an example Vernon cites the HBO series, Boardwalk Empire, the show that focuses on Prohibition era Atlantic City and the Republican boss of Atlantic County, Nucky Johnson. During one of the episodes Chris Mulkey the actor playing the role of Jersey City mayor Frank Hague appears on the scene. Hague and Nucky are sitting down together in a brothel, Hague with a prostitute on his lap and an alcoholic drink in his hand. Vernon points out that friend and foe alike would agree that this was a total mischaracterization of the man. Frank Hague did not drink alcohol nor was he a womanizer, and while his abstention from these vices may have been for moral reasons, practical political reasons no doubt also prevented such behavior. Hague suffered from a throat and digestive problem that prevented his drinking of alcohol, as far as women, Hague realized that his major support came from the Catholic Church and members of the church hierarchy, for Hague to be seen with a another women, especially a prostitute would have ruined his career.

Consequently, The Life & Times of Jersey City Mayor Frank Hague includes far more material than previous works on Hague, and is as much the story of the city Jersey City as it is of the man. Covering the years between 1871 and 1956 (that is, between Hague's birth and death) Vernon shows us a life that in some ways symbolizes the American dream: a boy from a poor neighborhood grows up to wield unimaginable power. It captures the grittiness of Hague's boyhood--the day-to-day of life near the factories and rail yards with its soot in the air and odors from nearby stockyards, the importance of ethnicity in local neighborhoods and the city's seemingly paradoxical combination of parochialism and diversity, dynamic growth and resistance to change. Initiated into machine politics as a young man, Hague quickly embraced the machine's values of order, allegiance, and authority and, above all, the pursuit of power. Later, he ran the city in accordance with these values; But Hague’s was a complicated legacy. While bringing top flight medical care to Jersey City and affecting national politics, he was also held responsible for police brutality and trampling on civil rights. Throughout the book, Vernon reminds readers that Hague’s real influence came from the powerful political machine he created. When he didn't like guidelines from national agencies he would go directly to the presidents he helped get elected, such as FDR. When he got bad local press, people lost their jobs and his neighbors marched in his support. When FDR began his campaign for the presidency it was Hague who launched it from New Jersey. It's startling to remember that this was simply a local office; Yet Hague’s influence affected the entire country.