The feature is a one-of-a-kind item that depicts Walt Disney's dream before it came true. This is the original document drafted by Walt Disney and artist Herb Ryman to give words and images to Walt's idea of a family fun attraction. It will be sold at Weiss Auctions of Oceanside, NY on Sat. Dec. 17, 2012. 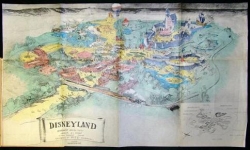 Oceanside, NY, December 06, 2011 --(PR.com)-- The auction is part of a weekend of sales at the gallery and online including dolls, toys, trains and action figures to satisfy any age kids’ holiday dreams come true.

The feature is a one-of-a-kind item that depicts Walt Disney's dream before it came true.

This is the original document drafted by Walt Disney and artist Herb Ryman to give words and images to Walt's idea of a family fun attraction. This complete document in a folder is one of 3 supposedly produced personally by Walt and Herb for Walt to take to New York to find a partner to invest $5 million to finance the building of Disneyland. He supposedly left these 3 documents with 3 bankers in New York and left without an investor.

This document was discovered at an estate sale on Long Island in New York in the early 1980s by a picker and has been in the same owner's hands since 1984 (collectibles expert and appraiser Gary Sohmers) who has extensively researched to determine its rarity and importance. It had been seen by Dave Smith of the Walt Disney Archives at a Disneyana Convention in the 1990s and Dave explained what it was.

The document includes an outer 9" x 12" folder with tabs to hold pages featuring what appears to be rub on lettering "DISNEYLAND." Inside the folder are 9 type pages describing Walt's planned park including describing the different "lands" with some that never came to fruition such as "Lilliputian Land" and "Happy Holiday Land."

The first Map attached inside the front cover is a large 24" x 36" stat, hand colored by either (or both) Walt and Herb in colored pencils features a fantasy birds-eye view of the proposed park. The second Map is a 12" x 18" stat of an architectural rendering of the proposed park showing an advanced stage of planning for the acreage that was purchased in Buena Vista.

The typed pages include quotes from Walt that have been referenced about the proposed park ever since, one page features only "Walt Disney - sometime - in 1955 will present to the people of the world - and children of all ages - a new experience in entertainment. In these pages is proffered a glimpse into this great adventure - a preview of what the visitor will experience - Disneyland."

This is an extremely rare document in the history of Walt Disney and has never been reproduced in whole or in part although several sources on the internet reference the document in research and company history, this is the only copy still known to exist as neither the Disney Archives or the Disney Museum has one and may not even have a complete copy. Notice: There will not be digital images of all of the pages available for this item as digital counterfeiting will devalue the item, there will be 4 images available including photographs of the Maps, qualified bidders who wish to see the item in person will need to view it in advance by appointment at the Gallery in Oceanside, NY.

The auction includes over 350 lots of Disneyana, Animation and Comic art including items from the Conventions, signed art and rare memorabilia. Previews will be during the week prior to the auction.

Items offered are part of a live auction at Philip Weiss Auction Gallery with items offered In numerical order at a pace of approximately 75 lots per hour. Please read the terms and conditions. There is a buyers premium and bids are taken in person, on the phone and online through Proxibid.