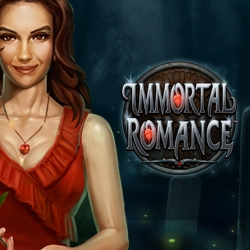 Johannesburg, South Africa, December 07, 2011 --(PR.com)-- Red Flush Casino has ended months of anticipation following the release of Immortal Romance. The video slot has been the focus of everyone’s attention subsequent to Microgaming announcing that it would develop a game inspired by paranormal genres in both television and film. Released on December 5, 2011, Immortal Romance has instantly become one of the most popular casino games, and captures the imagination through a cast of paranormal characters that are woven together into one compelling tale of forbidden love and intrigue.

“Immortal Romance is finally here to take players on a dark journey to a world where everything is not as it seems,” said Alex Roberts, Red Flush Promotions Manager, this week.

Vampires, zombies, werewolves and witches have for the past couple of years taken preference in popular culture, particularly romantic tales that revolve around humans and their paranormal counterparts. With this in mind and building on lessons learned from successful games such as Thunderstruck II and The Lord of the RingsTM, Microgaming has once again created a compelling game that is dressed in beautifully painted graphics that come to life through an original soundtrack that was especially composed and recorded by professional singers and musicians.

Best described as a paranormal love affair full of deception, Immortal Romance introduces the player to four main characters, namely, Sarah, Michael, Amber and Alex. Each member of the cast has an interesting background story that can be accessed directly from the in game pay table. It is up to the player to learn more about each character to uncover hidden truths while taking benefit from a selection of bonus features, including a Wild Desire Feature that can randomly turn up to 5 reels Wild and a selection of free spins buried deep inside the Chamber of Spins.

The Chamber of Spins is triggered when 3 or more Scatter symbols appear across the reels. The player can unlock the feature consecutively to progress through each of the chambers for a bonus reward:

· The first chamber will introduce Amber, a witch with supernatural powers, who awards 10 free spins during which all wins are multiplied by 5.

· The second chamber will introduce Troy, a 200 year old vampire with devilish charms, who awards 15 free spins with a 6x multiplier.

· The third chamber will introduce Michael, an 800 year old vampire that stays on the outskirts of society, who releases the 20 free spins rolling feature during which consecutive wins can trigger a 5x multiplier.

· The final chamber will introduce Sarah, the heroin and a doctor of pathology, who will award 25 free spins. Sarah’s Wild Vine Feature can additionally trigger at random to turn up to 5 reels Wild.

Similarly to Thunderstruck II, the Immortal Romance video slot is complete with a Player Achievements table to allow players the chance to keep track of their in game progress. Symbol Achievements are awarded for wins associated with each symbol, which are recorded and saved in the pay table.

Immortal Romance is available at Red Flush Online Casino, and can be played by registering a free account.