According to Bodyoars.com, after health orgs refused to comment on their bionic fitness device that had greatly strengthened some mobility hindered people, firefighters who also used prototypes, helped get the International Assn. of Fire Chiefs, FireRescue Magazine, to run an official Gear Test on Body Oars™ LOBOS™, as an "alternative workout device" without stressing (damaging) firefighters' joints and disks. 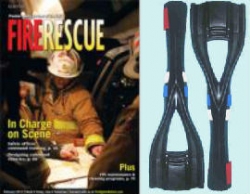 Columbus, OH, March 12, 2012 --(PR.com)-- Last summer a "Gear Test" was completed on the first consumer ready version of Lower Body Oars™, to see how useful they would be for firefighters.

This study was ordered by the media partner for the International Association of Fire Chiefs, Fire Rescue Magazine, and they were not paid or asked by the makers of Body Oars to do this study. This "Gear Test" from their 2/12 issue is linked below.

Over the last four years numerous health organizations and universities were provided information about how this same low effort version of Lower Body Oars called LOBOS™, had or can greatly strengthen the muscles and hearts of many severely disabled and ill people. However, they all refused to make public statements, yet according to Bodyoars.com, some universities are very quietly using them.

As this was going on, a few Central Ohio firefighters, who had been testing Body Oars prototypes realized a potential of remaining in powerful physical condition without overloading their joints and vertebrae.

Somehow their observations reached the San Diego headquarters of Fire Rescue Magazine, and they had Fire Chiefs put them through a complete "Gear Test," as a new firefighter "tool."

For over 30 years Fire Rescue magazine has been delivered to most firehouses in the free world, every month. However, for anyone not hanging around a fire house, the magazine is also published online at FireRescure/issue/54270/open to Page 15.

Keep in mind the test was for firefighters, not the general public. Here are a few comments from the accompanying article, written by Phoenix Battalion Chief Michael Ong.

Chief Ong has spent years in charge of firefighter health and wellness for the Phoenix FD, and has over 20 years experience in firefighter fitness training:

"An innovative, effective tool for those with physical limitations or those who simply need some added 'kicks.'

"For those without any physical limitations or joint issues, this product can provide a nice alternative to your standard workout.

"It was not an intense pushing, lifting, running, sets-and-reps type of workout. It was more like a steady, low-intensity effort. It was almost therapeutic; I felt some of my day’s stress being relieved.

"I did feel a sense of calm as I was exercising. Maybe this is what runners feel on a slow, long jog, or how swimmers feel when they’re completing lap after lap.

"You can get a good cardiovascular workout while increasing your core, hip flexor, leg strength and endurance."

Chief Ong had no conversations with the engineers or firefighters in Columbus, Ohio, and he was not told about the runner's high that typically happens from gently running LOBOS, that virtually everyone feels after five or so minutes.

Also LOBOS are only for gentle use, as being designed for everyone, they deliver almost every ounce of motion resistance energy in direct opposition to almost all core muscle contractions.

That means no matter if you are mobility disabled or a pro athlete, if you drive LOBOS with all out exertion before your body has several months to adjust, your weakest loaded core muscles will likely be injured. This is likely the world's first very stout "Gentle Use Only" core muscle cardio workout.

However, Chief Ong did not test their custom "athletic version" called "RAMBOS™."

Lower Body Oars move exercise forces directly to and from lower core muscles without also letting them travel through bones, joints and vertebra. It is basically converting legs to unbreakable oars so the core muscles have something other then far more fragile knees and feet to exert all their force into.

Because LOBOS can work very well while also floating in a life jacket, they work especially well for people who are too mobility hindered, or too ill to do any other stout exercise.

However, they also found that even these gentle effort only LOBOS are so effective they can provide a fine body core muscle based cardio workout for anyone. They are also showing running speed increases for athletes as they provide tremendous resistance to the full range the hips can swing, which builds running power beyond the reach of traditional running exercises.

Body Oars engineers say, "Body Oars will also reduce the amount of time athletes need to practice running by giving their core running muscles something other then knees, spinal disks and feet to exert all their running force into."

The engineer continued, "They also allow huge athletes to run painless marathons on only their running muscles. Nothing has ever come close to offering this before. LOBOS virtually allows anyone to give themselves a very powerful core muscle blasting cardio workout, without any pain, as they float around in a runner's high."

Breaking a plastic Body Oar seams to be a far better option then breaking a knee, however, according to the makers, no one has ever broken either while working out Body Oars.

Firefighters determined to remain in peek physical condition for 30-40 years were most intrigued by this aspect.