Did you know that you can purchase a box of "Whip its" for less than $15.00 over the counter? Did you know that the use of Whip-its by inhaling the contents is incredibly dangerous and can result in paralysis, asphyxiation and/or death? The Barron Law Corporation wants you to know, and wants your teenage children to know, that Whip its are not a harmless, fun party drug and that the use of Whip its may cause you or a loved one serious and lasting harm. 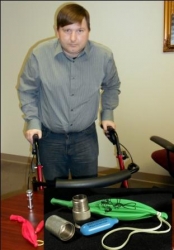 Sacramento, CA, March 29, 2012 --(PR.com)-- Sacramento personal injury attorney Deborah Barron states: "One of our clients, Jason S, found this out the hard way. He also wants you to know that Whip-Its can kill you. He didn’t know that and he believes that a lot of people out there consider Whip-Its to be safe. Jason now cannot walk without the use of a wheel chair or walker. Jason almost died. He was consuming 'whip its' and had no idea at all that his life and health were in jeopardy. Jason doesn’t want this to happen to you."

California Product Liability lawyer Deborah Barron of The Barron Law Corporation is in the process of investigating the distributors, marketers, and retailers of this product which has caused Jason such significant harm that his young wife literally had to decide, upon emergency admission of her husband at a local hospital, whether or not the doctors involved should take heroic actions to attempt to save her husband’s life, or if the doctors should merely let him die in peace. She was required to decide how to sign a Do Not Resucitate Order and she was advised that she should gather his family and perhaps the Clergy for what appeared to be a fatal outcome. Fortunately, through heroic measures of physicians at Doctor’s Medical Center of Modesto, the victim of this product lived. However, this 35 year old gentleman’s ability to walk, breath, talk, and ambulate safely has been, and still is, severely compromised.

Whip-its is the street name given to a class of products marketed by their manufacturers to be used in a machine to create home made whip cream. Whip-its are small steel canisters slightly smaller than the size commonly used to store carbon dioxide for use in BB guns and other products. These small steel canisters, however, contain a high concentration of Nitrous Oxide and are currently being sold over the counter, online, and at specialty shops and head shops throughout California and the nation to anyone with an I.D. card showing they are 18 years of age or older. Significantly, the whip-its are often marketed alongside "crackers" (devices used to open the steel canisters) and punching bag balloons. In fact, Jason was physically taught how to use the "cracker" to open then "whip it" and fill the balloon with the gas to inhale – all of which was demonstrated to him by a local head shop employee.

Jason therefore consumed numerous canisters of Nitrous Oxide gas, believing — as many mistakenly do – that since this gas is a commonly used anaesthetic and mood relaxer that even your dentist may suggest during routine procedures, that the gas was safe and harmless if inhaled. This is not true.

Notably, in the news recently, actress Demi Moore was hospitalized due to her use of what the public has been informed was "whip its". On January 11, 2012, two persons were killed in Sacramento when the driver of a vehicle admitted to having consumed "whip its" just prior to crashing at high speeds into the car occupied by the persons that were killed. "Jackass" star Steve O suffered horrendously after his use of Whip Its.

Attorney Deborah Barron states, "Nitrous Oxide is out there, on the streets, in the stores, and likely at raves and parties that are attended by youths and others. Whip-its / Nitrous Oxide may be sitting next to the driver of the car behind you. It is incredible that a person can walk into a local head shop and be provided with 25 steel canisters of Nitrous Oxide at a cost of less than $15.00, and purchase a $10.00 'cracker' and a $3.00 punching balloon, and then be taught how to use the combination to obtain a short-lived, but mind and mood altering 'high'. It is also incredible that youths, college students, adults, and perhaps even the purveyors of this powerful intoxicant are not aware of just how dangerous this substance can be."

KCRA News in Sacramento, Calif. reported that in a random study of eighth graders, over 50 percent of them said they had tried or been exposed to Whip Its. Other news outlets have reported that the use of Whip Its is responsible for over 100 deaths per year.

Jason and the Barron Law Corporation want you to know that these products are not safe and can result in hospitalization, to include death. This is what the doctors said about Jason’s condition: "Subacute combined degeneration of the spinal cord involving clearly the pyramidal tract as well as the corticospinal tracts based on MRI of the spine; Cyanocobalamin deficiency based on the very low level of his first B12 blood serum level; Nitrous oxide abuse; His hands are also getting weak in terms of his grip strength. The patient is unable to walk. He is unable to stand. The patient had a prolonged, more than 10 days, ward stay due to progression of his bilateral lower extremity weakness. He is unable to even lift his leg. MRI examination showed a pyramidal tract as well as corticospinal lesion in the study."

"Whip its" / Nitrous Oxide is a drug that should not be available over the counter and the Barron Law Corporation is dedicated to making sure that these products are known for what they are – deadly and unsafe – and that appropriate measures are put into place to prevent others from sustaining similar, permanent, disabling, harm, after being taught how to get "high".

If you, or a loved one, have suffered from damage to your body, spine, nervous system, or your abilities to use your hands or legs after using "whip its", please contact the Barron Law Corporation at 800-529-5908 www.lawbarron.com for further information on your legal rights and to assist in making sure that other unsuspecting persons do not become victim to such tragic results using "whip its".

Compassionate, Understanding Attorneys - Barron Law knows that no amount of financial compensation can heal the physical and psychological wounds caused by a sexual assault. They do believe, however, that it is important to hold wrongdoers accountable for their actions and protect victims' rights.