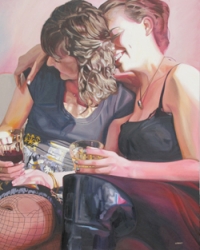 Portland, OR, July 15, 2012 --(PR.com)-- In his first solo show at Gallery 114, Christopher B. Mooney will present his newest works from his “Figurative Works: Explorations Into Human Connections” series: explorations into the human connections that fill us with hope, joy and celebration in times of uncertainty, fear and doubt. A renowned local painter of Portland’s scenic bridges, Mooney will offer a rare glimpse into the beautiful moments and human connections that bring meaning to our lives. The show runs August 2-31, with an opening reception First Thursday, August 2, 6-9 pm. The gallery is open 12-6 pm, Thursday through Sunday.

Long known for his outstanding photo-realistic oil paintings of bridges that physically connect east and west Portland, Oregon, along the scenic banks of the Willamette River, Mooney has found himself wanting to delve deeper into the physical and emotional connections between people — husbands and wives, lovers, friends — ordinary people who connect with us daily and who are special because of the place that they hold in our hearts. According to Mooney, “Simple and beautiful acts of human connection keep us grounded in the moment, support us, are the source of our inspiration, feed our souls, and give us the strength to not just survive, but thrive.” He sees his new ground-breaking works in oil as a “source of hope, inspiration, comfort, and sustenance in a turbulent world of fear and uncertainty.” Featured in the show will be paintings from his new “Intimacy” series, as well as his collection of individual portraits. Painted inexquisitely beautiful detail in oil on large-scale canvas, these works capture cherished moments that touch the heart and make one stop to appreciate the simple beauty in a touch or gaze. These paintings portray a deep longing for human connection,” says Mooney, “celebrated in a rich palette of color and lovingly delivered in each brush stroke.”

In conjunction with Mooney, guest artist Roxanne Patruznick, http://www.roxannepatruznick.com/ will present her series of nudes, oil paintings that explore an emotional intimacy in the human experience. Patruznick says she is drawn to what is vulnerable through the study and interpretation of the nude figure: “Working in close collaboration with my models to create the specific image, I try to communicate past the nude image on the canvas to tell a story through this frozen moment in time. I paint to show the beauty in all human emotions. Whether the obvious beauty of joy or the subtle beauty of sadness and longing, I attempt to give the viewer a window into the psyche of the painted subject and at the same time, themselves.” Patruznick sees her couples series as the intimate dynamic between man and woman, where she shares her intrigue with the contrast of skin tones next to one another.

Further information on Mooney’s paintings can be found at http://christopherbmooney.com and https://facebook.com/christopher.b.mooney

Gallery 114 is the only established gallery in Portland that has persisted in allowing its artists absolute artistic freedom throughout its more than 20-year history. Founded in 1990 as an artist collective, Gallery 114 and its members have consistently produced a diversity of artworkFurther information about the gallery is available from Diana Crites at 503-243-3356.
Contact
Christopher B. Mooney
503-320-0518
www.christopherbmooney.com
Gallery 114
1100 NW Glisan
Portland, Oregon 97209
503-243-3356
contact@gallery114.org
www.gallery114.org