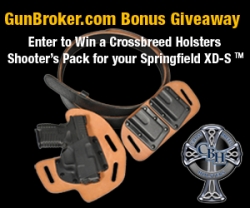 Kennesaw, GA, August 02, 2012 --(PR.com)-- GunBroker.com, the world’s largest Internet auction site for firearms and accessories, has teamed with CrossBreed Holsters to add a Shooter’s Pack as a special bonus to its “GunBroker.com Springfield XD-S™ Giveaway.” Through August 31, new and existing GunBroker.com registered users can enter GunBroker.com’s XD-S giveaway for the chance to win a Springfield Armory XD-S Compact .45 ACP Pistol. If the winner of the XD-S has also registered for the bonus Shooter’s Pack giveaway at Facebook.com/GunBroker, they will automatically win the Shooter’s Pack by Crossbreed Holsters – complete with the SuperSlide 3 slot holster, an OWB Mag Carrier for their XD-S and CrossBreed’s Instructor Belt.

“CrossBreed is thrilled to once again team up With Springfield Armory on another of their fine products,” said Mark Craighead, owner of CrossBreed Holsters. “The XD-S gives a shooter the time proven 45 ACP cartridge in a small concealable package. Coupled with our shooter’s pack or other holster systems, you have one of the best combos available for CCW today! Thanks to GunBroker.com for this great opportunity to spread the word. ”

Enter to Win
To win both the Springfield XD-S and the bonus Shooter’s Pack by Crossbreed Holsters, participants must enter via Facebook at http://www.facebook.com/GunBroker as well as complete the online entry form for the XD-S at http://www.gunbroker.com/Contest/SpringfieldSweepstakes.aspx.

About CrossBreed Holsters
Crossbreed Holsters, LLC was started in 2005 by Mark Craighead, an avid shooter, re-loader and CCW permit holder who was introduced to firearms by his father as a young boy. Crossbreed Holsters has gained international recognition as a maker of some of the best and most functional concealment holsters available. Each holster is made by hand, right here in the USA, by craftsmen personally trained by founder Mark Craignead.

About the Springfield Armory XD-S and the Company
This latest addition to the Springfield Armory line of XD pistols debuted at SHOT Show 2012 to rave reviews. With a slim, single stack frame at only 1-in. wide, the XD-S delivers all the performance of a .45 with superior control and comfort, without sacrificing important safety features. The design offers a single-position Picatinny rail, making this one of the only pistols of its size that can be accessorized with lights and lasers.

The first name in American firearms, Springfield Armory® began when George Washington ordered its creation in 1777 to store revolutionary ammunition and gun carriages. In 1794 the armory began the manufacture of muskets for a young country. For the next 150 years, Springfield Armory® functioned as a supplier for every major American conflict as well as a “think tank” for new firearm concepts. After a brief closure from 1968 to 1974, a passionate family by the name of Reese rescued not only the name “Springfield Armory®,” but the philosophy that drove it for centuries. With reverence for the legacy of the Armory, the Reese family resurrected the most historically significant designs produced by The Armory- M1 Garand, 1911-A1, M1A™ –and fueled by the same obsession for improved manufacturing techniques and cutting edge design that inspired the likes of John C. Garand, and John Browning. Today Springfield Armory continues to develop products that are loyal to its heritage while ensuring The Armory’s future with such innovations as the category leading XD®, XD(M) ® and the new XD-S™ polymer pistols.

About GunBroker.com
GunBroker.com is the world's largest gun auction website. Launched in 1999, GunBroker.com is an informative, secure and safe way to buy and sell firearms, ammunition and hunting/shooting gear online. GunBroker.com promotes responsible ownership of guns and firearms. Aside from merchandise bearing its logo, GunBroker.com sells none of the items listed on its website. Third-party sellers list items on the site and Federal and state laws govern the sale of firearms and other restricted items. Ownership policies and regulations are followed using licensed firearms dealers as transfer agents.
Contact
GunBroker.com
Brenda Becker
404-214-0722 x115
www.GunBroker.com