Innovative Kids of America Project is a cutting edge exhibit designed to teach kids step by step on how to become entrepreneurs. This exhibit will be at fairs and livestock shows across the country. 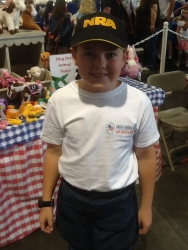 Dianne Linderman, a serial entrepreneur, started her own jewelry making business at the age of 16 and bought her first Mercedes a few months later. Throughout her life she has continued to build successful businesses such as The Great American Animal Entertainment Company, provider of America’s premier petting zoos, pony rides and interactive children’s entertainment. (That company is now owned and operated by the young people she inspired to join her.) She has also been a successful restaurateur and currently has a traveling cooking show,” Everything That Matters in The Kitchen,” staged in a 1940 red Ford convertible.

A trailblazer in America’s Fair Industry since 1984 and a nationally syndicated radio talk show host (www.everythingthatmattersradio.com), Dianne is a true mompreneur. She knows that cultivating the natural entrepreneurial spirit in young people is not only the key to their success in life, but also the key to our country’s future. Dianne’s true passion is helping kids unleash their natural potential to become whatever they want to be, and that is what Innovative Kids of America Project is all about.

In this distressed economy entrepreneurs are the people whom America is calling upon for strength. According to the United State Department of Labor “Entrepreneurs drive America's economy, accounting for the majority of our nation's new job creation and innovations. The U. S. Small Business Administration reports that America's 25.8 million small businesses employ more than 50 percent of the private workforce, generate more than half of the nation's gross domestic product, and are the principal source of new jobs in the U.S. economy.”

More recently Governors from all across America gathered at the Governors’ Meet in Williamsburg Virginia where a plan to encourage entrepreneurship to individual states was unveiled, “Nebraska Gov. Dave Heineman has produced a blueprint for governors across America to improve their states' economies by encouraging entrepreneurship, cutting regulations and investing in growing industries. The result of a year of research and study, Heineman presented his 'Growing State Economies' to the annual gathering of the National Governors Association in Williamsburg, Va., on Friday as he prepared to end his one-year term as the group's chairman.” AP July 13, 2012

Innovative Kids of America is a cutting edge exhibit designed for fairs and events across the nation. Entrepreneurial Kids are taught the art of entrepreneurship, they sell their wares and keep their profits!