The only known artifact owned and worn by Green Bay Packers founder and legend Curly Lambeau is currently being sold by MEARS Online Auctions, www.mearsonlineauctions.com. Recently uncovered are an early pair of heavily worn Riddell football cleats, dating to the 1929-34 era. 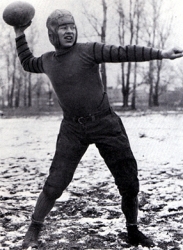 The shoes are of great historical importantance. In the early days Curly Lambeau single-handedly carried the Green Bay Packers franchise on his back, and was wearing these shoes on his feet during the process. Lambeau was credited with adding the Packers to the early NFL and sustaining the franchise through many early hardships. His efforts were rewarded by having the team’s stadium named in his honor. Possibly, the most important piece of early Green Bay Packers memorabilia to survive.