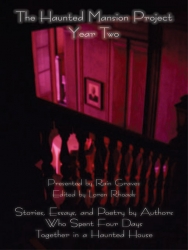 In the fall of 2012, seventeen horror writers and artists met in Northern California to spend four days together in a haunted mansion. Ten of them were survivors of the original Haunted Mansion Writers Retreat; the rest were virgins who encountered the house and its denizens for the first time. Joining them was the group of paranormal investigators who had recorded a plethora of EVPs as well as anomalous lights and ominous shadows in the mansion in 2010. This anthology collects short stories and poetry—as well as real impressions and investigative conclusions—inspired by that long weekend.