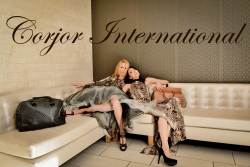 Washington, DC, September 15, 2013 --(PR.com)-- The designer whose name and label both are synonymous with impeccable style, spectacular elegance and worldly sophistication, Ean Williams sets the template for other aspiring fashion designers. Williams realized his penchant for fashion early in life. The proud father of now three boys, he introduced the fashion label, “Corjor,” via a combination of the names of his two elder sons, Corey & Jordan in 1998. Much to the delight of his admirers, Williams has since expanded his label to include four distinct brands: Corjor Sport, Corjor Menswear, Corjor Couture (available by special order), and most recently, Corjor Magnum series, a couture briefs collection for men.

Williams is also profiled in Upscale Magazine, Prince Georgian Magazine and On Tap Magazine as well as on the front pages of the Washington Times, Gazette, and Washington Life’s “Creative Stylist List.”

In addition to these accolades, as executive director and founder, Williams has also made history by creating and launching internationally D.C. Fashion Week (DCFW). A partnership of independent fashion designers, producers and models, DCFW is the fastest growing international fashion week exhibit in the world as it now reaches an audience of more than 10 million per event.

Currently, more than 100,000 admirers are following DCFW in anticipation of its 19th season. DCFW is set to present its Spring/Summer 2014 collections at multiple venues in Washington, DC beginning on the 23rd and through the 29th of September 2013.