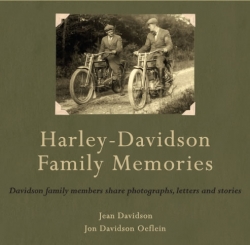 Jon Davidson Oeflein and his mother Jean Davidson just released "Harley Davidson Family Memories," a captivating book compiled of in-depth recollections and rare photos of the Harley-Davidson founders and their families from the early days to today’s generation. This book breathes life into the rich history of the cultural icon of Harley-Davidson and is sure to delight both riders and collectors.

Jon Davidson Oeflein is the great-grandson and Jean Davidson is the granddaughter of Walter Davidson, one of the four founders and the first president of Harley-Davidson. Her father, Gordon Davidson, was Vice President of Manufacturing. Both began riding a Harley at very young ages, and rubbed shoulders with all the Harley and Davidson family members, famous racers, Hell's Angels and even Evil Knievel.

"We are excited to welcome Jon Davidson Oeflein to the Los Angeles community," commented Gene Barger of Barger Harley-Davidson. "Having the opportunity to meet and talk about Harley Davidson family history and ask questions directly of a family insider is going to be quite a ride. It is also a great time to take a look at the new 2014 Harley-Davidson models, some of which have liquid-cooled engines and touch-screen electronics more akin to luxury automobiles.”