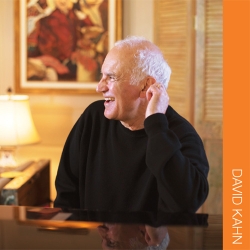 San Francisco, CA, November 21, 2013 --(PR.com)-- Dr. David Kahn, pioneering cosmetic surgeon to the San Francisco Bay Area for over 30 years, recently released his third album as a jazz pianist and band leader. With its range of styles from ballads to bossa nova, to straight ahead jazz, the "Fantasy Sessions" is a set of quartet performances that reflect the harmonious diversity of the City by the Bay. In it, David Kahn demonstrates the cool, crisp touch that has made him a gigging favorite of the City's lux lounges and the "steady hand" of San Francisco cosmetic surgery.

Kahn has been gigging the San Francisco Bay Area on his spare time for over two decades. He learned his musical craft at an early age and simultaneously pursued his two passions, music and medicine, while attending medical school at the University of Michigan. He's had his steady hand on both passions since moving to the Bay Area but has worked especially hard to hone his piano playing these past two years. The Fantasy Sessions is a culmination of Kahn's ongoing experience and his most recent mastery.

“Man, I gotta' say it was tough, but it was also really enjoyable. From working at that piano almost every night for two years to finally getting in the studio and having a blast with the fellas, it was certainly an experience I'll cherish for a lifetime," said Kahn. "And with the super talented Akira Tana on drums, Anton Schwartz on sax, and John Wittala on bass it almost felt like I could do no wrong, but I do hope that jazz fans everywhere will be able to recognize and enjoy how much work I've put into refining my piano play for this album."

The Fantasy Sessions is now available for download at iTunes, Amazon, and CD Baby (search for "david kahn"). It's also available on CD at a handful of record stores in the San Francisco Bay Area. Call 415.567.6673 to find out where you can purchase a CD in your area.

David Kahn is also the Kahn Center for Cosmetic Surgery’s Master Surgeon, and in his 30+ years of experience in plastic surgery he’s performed over 7,000 procedures, ranging from rhinoplasty (nose jobs) and asian rhinoplasty (nose lifts) through necklifts, facelifts, and more. Located in downtown San Francisco, the Kahn Center for Cosmetic Surgery serves the entire Bay Area and Silicon Valley. For more info on Dr. David Kahn or the Kahn Center, please visit: http://www.SF-Plastic-Surgery.com