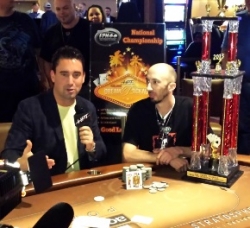 The buy-in: zero (0). Schumaker was one of 94 players from 17 states across the country that had qualified for the freeroll championship tournament playing at participating bars and taverns in weekly free poker tournaments.

Schumaker continued his hot streak into the HPT-Stratosphere main event the very next day, just missing the televised final table. Schumaker was eliminated in 15th place for $7,702.

Quite an experience for Schumaker, 38, who works at a bakery in Fergus Falls, MN (population 17,000 about 180 miles northwest of Minneapolis). This was his first trip to Las Vegas, and his first-ever flight on a plane. He even missed the outbound flight from Grand Forks, ND and had to rebook a different flight to get to the Stratosphere in time for the FPN championship event. Schumaker stated, “I thought about cancelling the trip after I missed the flight, but glad I didn’t.”

The bright lights did not phase Schumaker as he entered the HPT Stratosphere main event, where he outlasted the likes of Scotty Nguyen, Hoyt Corkins, Kathy Leibert, Dennis Phillips, Eli Elezra, and many other notable players. It was Schumaker’s first-ever tournament cash.

The Free Poker Network organizes free-to-play poker leagues at over 200 participating bars and restaurants across the country with two major promotions per year with approximately 8,000 active players. The league began in 2005 and recently surpassed $1 million in total tournament buy-ins and travel packages awarded to players in freeroll events. Players qualify by earning points at weekly tournaments for entry to playoff events. Players can also qualify online on the Zen gaming network, or even get lucky by scratching off 4-of-a-kind or better in a Scratch Poker card game at participating locations. The league is currently seeking expansion to new territories and has an independent representative program.
Contact
Free Poker Network, Inc.
Brook Lyter
701-293-9400
www.freepokernetwork.com
Facebook/freepokernetwork.com
twitter: @fpnpoker