A teenage girl joins a presidential campaign in this fantasy-adventure through the bizarre world of American politics. 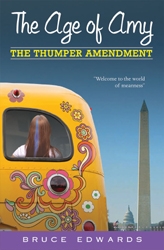 Brea, CA, April 07, 2014 --(PR.com)-- Character assassination, mudslinging, and smear tactics are just a few of the outrageous campaign methods explored in a new book for young adults, by award-winning author Bruce Edwards. With midterm elections approaching, and a presidential race just around the corner, examining the forces that influence elections is a timely message. "The Age of Amy: The Thumper Amendment" offers a fun and thought-provoking look at American democracy, from a teenager's point of view.

About The Book
16-year-old Amy joins a campaign to elect the next U.S. President, when she discovers that the opposing candidate's son is a grade school bully from her past. New campaign reform laws now require candidates to face off on a TV reality show. The "race for the White House" becomes just that, as the determined teenager embarks on a thrilling, mind-bending journey.

The second book in The Age of Amy series, the story’s central theme is "meanness," and how it manifests itself through bullying, discrimination, and tabloid journalism.

"We live in a culture of meanspiritedness," states author Bruce Edwards. "I wanted to present a worst-case example of this behavior. Centering the story around a presidential campaign was a no-brainer, since it is a time when people are at their meanest." The result is a fantastic plot that is far from politics as usual.

About The Author
Bruce Edwards is a former Hollywood film animator. He majored in Architecture in college, but switched to Music to join the burgeoning San Francisco music scene. As a composer and musician, he wrote rock tunes and radio jingles, and toured as a pop music artist. His other creative endeavors include a stint as a puppeteer and performing Magic at Disneyland. Mr. Edwards lives in Orange County, California.

About The Series
The Age of Amy books feature an unconventional teenage protagonist who struggles to make sense of the times she was born into. The stories address the challenges facing today’s adolescents, against a backdrop of social change. "I try to delve beneath the surface of issues,” says the author, “to expose the roots of why these problems exist in the first place. And what better way to do that than through fantasy?"